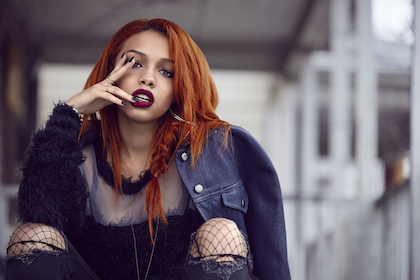 If you’re a fan of Jhene Aiko and Tinashe, then you’re sure to love up-and-coming R&B songstressKyndall! The 19-year-old “Close To Me” singer has worked with major producers along the lines of Boi 1da, Dj Dahi, Maejor Ali, and more before dropping her debut EP, Still Down, on SoundCloud. We got the chance to find out a little bit more about her creative process and how she got her start in the music business at such a young age!

YH: Congrats on the EP! Can you tell us a little bit about the creative process behind it?

K: Soooo thankful it was unusually easy and organic! I spent a while venting to my producers about this on-again/off-again relationship and the head space I was in at the time. Right out the gate, it all got wrapped into songs that fit together and told a story, and we recorded the whole project in 6 days.

YH: Do you often make music based on personal experiences?

K: Absolutely! I’m really drawn to storytelling and like to sing my way through whatever is happening (or NOT happening) in my life.Still Down is basically every phase of my first relationship, set to music. The good, bad, ugly. It’s all there.

YH: How did you first get involved in the music business?

K: I came from a musical theatre background, so recording wasn’t exactly where I was naturally headed when Atlantic found me from a old acting audition tape and reached out to my acting agent. When we finally connected in person, I had no material to play, no YouTube page, no fan base whatsoever, nothing but my voice, so that’s how I was signed -- at barely 16.

YH: How have you developed your own style and sound as an artist?

K: My own sound has taken a really long time. Getting started was tough — I was really young, and hadn’t lived much. What was I singing about? What was my sound? I’d snagged a major record deal, but I was still starting from scratch. I recorded everywhere with everyone in the beginning — I call them my wilderness years, but was never really satisfied, and I’m a perfectionist. There was a lot of pressure to release countless songs I’d cut and start building a fanbase on them, but I didn’t get comfortable doling out songs that I didn’t feel reflected me, so I waited. It cost me a really late start, but eventually I met and gelled with the producers on Still Down and everything quickly slid into place. We worked from my hometown, Houston, which has this really chill, urban, southern vibe that we discovered was a missing piece in my sound. It made complete sense to go back to where I was born and raised and fold that flavor into my sound. My style is the other Houston-bred piece. We’re sweet, southern belles, but you won’t be shocked to see a cute girl sport a grill from time to time, either. That flip-side is very Houston too.

YH: Who have been some of your biggest inspirations/influences in the music industry?

K: My hometown (Houston) has been the biggest influence for me; though, being a Texan in general definitely plays its part. It’s like being born hard-wired with a relaxed, southern swag. We do our own thing, blaze our our trails. It’s not called The Lone Star State for nothing. I would count Janet Jackson as an influence. It’s obvious I’m influenced by '90s R&B, when people were really writing and making crazy melodies and harmonies. I loved the way they were being so vulnerable and real about how they felt and putting into song. Still Down is a nod to that. In today’s landscape, I love Travis Scott,Tory Lanez... I listen to plenty of Jhene Aiko,Sia, and Kanye these days too.

YH: What’s your favorite track off the EP? What’s the story behind it?

K: It depends on the day and my mood. I enjoy performing "Bullet". "Bullet" was a real departure from the rest of the EP. I grew up a hugeSting fan. My mom had him on repeat on every road trip, and I remember sitting in the backseat listening to "Shape of My Heart" and asking her to play it again and again. Sting’s music always feels gorgeous and hypnotic to me, and I wanted something that stood out as different from everything else. "Bullet" grew from wanting to pair with that classic, melancholy, guitar sample with lush, heartbreak-y lyrics. It’s the only record on Still Down with it’s own, swept-away kind of feeling. It’s timeless.

YH: If you could open for any artist on tour, who would it be? Why?