Fans Donate Big Bucks For the Chance to Live Like Their Favorite "Downton Abbey" Characters! 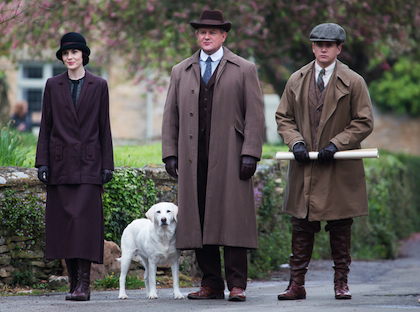 When you really think about it, the show “Downton Abbey” probably shouldn't interest us as much as it does. But thanks to the fascinating hidden lives of the servants and all of their delightful bickering (Mr. Carson + Mrs. Hughes 4EVA!), the show probably wouldn't be as big of a hit as it is. The wealthy inhabitants of Downton Abbey simply don elegant gowns for endless dinners, occasionally putter about to jazz, ponder tedious marriage prospects, and randomly farm (why did Edith work on a farm again?). With the exception of Maggie Smith’s wondrous one-liners, the wealthy folks’ lives on “Downton Abbey” are rather... meh.

Nevertheles, fans are paying exuberant amounts of money to live just like the Crawleys, and it's all for a good cause -- A recent Christie’s charity auction raised a whooping $68,000 to support Heroes at Highclere, all of which came from fans who want to indulge in the “Downton Abbey” lifestyle. For those who donated to the auction, they will be treated to an authentic “Downton Abbey” experience, held at Highclere Castle, where the show is filmed. Some of the activities do sound rather charming, including a picnic for four, a dinner for eight, and an overnight stay in one of the castle’s luxury rooms (ooooh!). On the other hand, some of the other packages sound a bit more banal, including learning how to properly set a dining table at Highclere Castle. Unless Mr. Carson is teaching you how to do this, it doesn’t seem worth paying thousands of dollars for a lesson you can learn from Emily Post.

How much would YOU pay to experience the “Downton Abbey” lifestyle?