Faith No More Keyboardist to Stage a Bigfoot Musical! 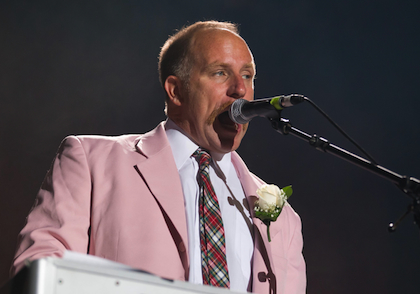 The keyboardist of the influential rock band Faith No More, Roddy Bottum, is making a new album with the band for the first time in 18 years, entitled Sol Invictus. A new Faith No More album, however, is not the only thing that Bottum is up to these days. Recently, he announced that he’s developing an opera about everybody’s favorite missing link... Bigfoot!

That’s right,just as predicted, Bigfoot is fast becoming the new pop culture craze, and what better way to help that along than creating an opera about the lovable fur ball? No music demos have been released as of yet, but Bottum has spoken about the story behind this opera, called Sasquatch: The Opera. It will follow a young woman who owns and operates a Bigfoot tour company where she takes people into the woods to try and see a real live Bigfoot. After actually encountering a Bigfoot, much of the group runs away and leaves her behind. The young woman than enters into a romantic relationship with the Bigfoot(!!). But don’t take my summary for it all. Check out the video below to hear Bottum give his input on his work and relating it back to Frankenstein:

As mentioned before, this isn’t the only thing that Bottum is up to these days. Faith No More’s Sol Invictus is set to hit shelves and digital download stores on May 19, 2015, and torrent sites sometime earlier, presumably. Sasquatch: The Opera has no official date release, which I was hoping would be around the same time asSol Invictus. (Let’s hope Sasquatch: The Operadoesn’t become a... missing link!)

While you wait for the album or more news on the opera, Faith No More has already released two singles for their upcoming album. One is “[email protected]”, which the lyrics are pretty NSFW, so instead let’s listen to their second single “Superhero”. Keep in mind, newbies to Faith No More, bands like Nirvana, Alice in Chains, and even Metallica have cited Faith No More as an influence. Enjoy!