Examining the 1st Trailer for the 'Fantastic Four' Reboot 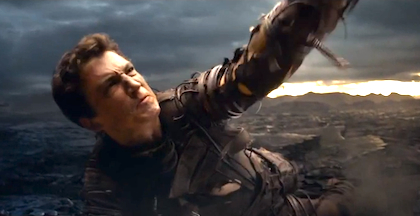 Full disclosure: I know practically nothing about The Fantastic Four other than what their powers are and who their archnemesis is. Oh, and their suits are blue. Oh, and there are 4 of them (allegedly). I also seem to recall that there were two other films made about The Fantastic Four not too long ago, but I don’t remember much about them other than a big orange rock in underwear and Chris Evans getting lost on his way to the Captain America set. Well, a lack of knowledge has never stopped me from a enjoying a comic book here and there, so I am perfectly open to a reboot of The Fantastic Four, and I’m sure everyone else on the internet agrees with me as well, right??

... Wow. People are really, really, really concerned about this movie. When it was announced that Josh Trank was going to helm a reboot of The Fantastic Four, most people nodded in a genial and thoughtful way as they added the film to their ever-growing list of prequels, sequels, and reboots that will rival a Stephen King novel in length by the time 2020 hits. I mean, Josh Trank had a clever take on superheroes with his film Chronicle, so why not let him take a crack at getting The Fantastic Four back on their feet? Let me take you through some other reactions as more and more information was revealed about the movie.

“Oh, they’re going to be portrayed as really young adults in this film?"

I will admit that I almost decided to care about something as uninteresting as the age of the characters, but then I kind of got hungry and forgot to.

“Oh, their costumes are going to be sort of like advanced hazmat suits?”

Well, the idea of costumes is silly anyway, so why not embrace that idea and actually mold their function into the base of the story in a way that is still visually interesting and practical in a storytelling sense?

“Doctor Doom is going to be portrayed as an angry internet commentator?!”

I kind of laughed when that one happened. But, I mean, that’s only a small piece of information about a character who could turn out to be one filled with deep meaning as well one who provides some cruciality to the story. So, we probably shouldn’t jump to conclusions until we’ve seen the movie, right?

I can only assume this worry came from them not having seen Michael B Jordan’s excellent performances in The Wire, Fruitvale Station, and Chronicle. Comic book fans are fairly jittery when it comes to anybody (regardless of who they are) daring to physically inhabit the persona of a non-real being that they have come to adore over the years. So, I’m guessing their reaction mainly came from not knowing that Michael B Jordan is a terrific actor and one that would do the role of Johnny Storm proud.

So, let's look at the trailer now, shall we?

So, what can I tell you about this trailer? Well, not much really. You’ve got an amazing cast consisting of Miles Teller (who is phenomenal in Whiplash), Kate Mara, Jamie Bell, and the aforementioned Michael B Jordan. These actors and actresses are very good at what they do, and hopefully the story is worthy of their time and effort. Showing them as kids at the beginning, along with their already youthful quality, feeds the idea that this movie will carry with it a spirit of adventure and discovery. The movie also looks like it might have a bit of edge as well, as it seems like whatever the experiment is that gives them their powers does not end with what one would call a “happy” accident.

The fact that the trailer seems to be emphasizing sacrifice and consequences in the face of a search for knowledge makes me a teensy bit hopeful that this movie might just be more than another “Good Guy versus Bad Guy” scenario. Of course, I am expecting a healthy dose of entertainment as well, and so far, I dig the brief glimpses that we’ve been given of the world. The Thing special effect towards the end looked almost like stop-motion animation, although I highly doubt that’s what they used. It did kind of remind me of the special effects used in Noah in order to bring the Watchers (angels encased in rock) to life. I’m not sure what expectations I had in regards how The Thing would look, but as of now, I am pleasantly surprised to be somewhat caught offguard by it. It looks like they all start out wearing the same “space suit” and that, over time, the look of each of their suits changes. Mayhap the changes on the outside reflect personal changes in each of the characters. Mr. Trank has obviously studied filmmaking and storytelling, and I applaud him for his efforts in bringing such a good and intriguing trailer to life. Now let's hope he does the same thing with the entire movie!