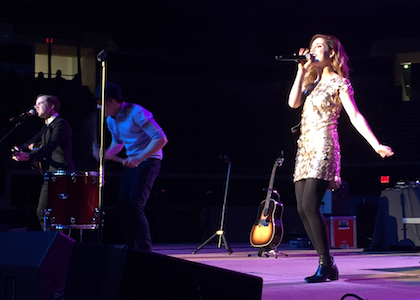 Have you ever wondered how the stars spend Christmas? Well, here’s a glimpse! I caught up with Echosmith and The Script during Electric 94.9’s Acoustic Christmas concert where they revealed their holiday plans and what’s on their Christmas wish list.

Echosmith, an all-sibling band, will return home to Los Angeles to celebrate Christmas after being on the road promoting their album, Talking Dreams. Christmas isn’t the only upcoming celebration for “Cool Kids” singer Sydney Sierota — she also graduates high school this week! Celebratory plans have yet to be determined.

As far as their Christmas wish list goes, “Sleep,” Noah Sierota chuckled, while Sydney asked for yoga paws. “They’re yoga mats only on your hands and feet. You don’t have to bring a mat,” which is convenient for the group on the go.

One of the band’s favorite Christmas traditions is opening a gift from their parents and siblings the night before Christmas. “That was kind of a newer tradition because we just were too anxious to wait until the morning to open more presents,” says Sydney. “And then we also have a breakfast bake that we eat every single Christmas morning. It’s the best thing ever.”

Mix ingredients and bake in oven.

While Echosmith hit the stage to perform, I caught up with The Script backstage where they too dished on Christmas plans.

Lead vocalist Danny O’Donoghue will be hosting Christmas at his house in Ireland, with a whopping sixteen people to attend to. “It’s going to be a big, giant family Christmas.”

Like Danny, vocalist/guitarist Mark Sheehan said, “It’s home all the way. I’m actually going to travel to Ireland as well this year to spend New Year’s there too, so between London and Dublin is where I’ll be.”

The opposite can be said for drummer Glen Power. “I might stay in America. I think I’m going to be in Miami, maybe. I’m still working it out, but I don’t want to go home to be honest. I want to bring home to me.”