Dwayne Johnson to Go on a 'Rampage' in Upcoming Video Game Inspired Movie! 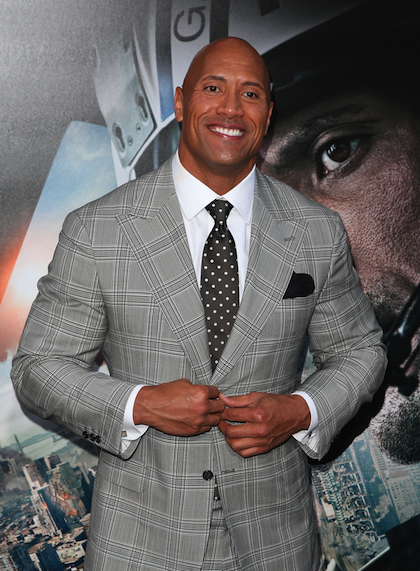 Do you remember growing up and playing any of the several '80s video games Ramapage? It originally invaded arcades in 1986, and then, 10 years later, it hit Play Station, N64, and even the lesser remembered Sega Saturn. Ever since then, it’s been a whirlwind of new installments and has been plaguing fans with the need for more. Fans of Rampage often find themselves questioning, how much does this game define their lives? The answer: COMPLETELY. Who else’s life is this game about to define? How about Dwayne “The Rock” Johnson?! Who will be starring in a film adaptation of the videogame. Do you smell what The Rock is cooking? Yes, we do, Dwayne, it’s an awesome adaptation of great video game.

Some of you may be asking yourselves, what this game is? First off, you should already know. Second of all, I’ll tell you because it’s a masterpiece I wouldn’t deprive of anybody. Rampage follows the misadventures of two guys and a girl named George, Ralph, and Lizzie. Before being abducted for mutation experiments by Scumlabs (those scumbags), George, Ralph, and Lizzie were just three ordinary, mild-mannered human beings. After that human scum at Scumlabs got their hands on the three, George become a giant Gorilla, Ralph became a giant werewolf creature, and Lizzie became a giant lizard. Their roles in life are simple -- destroy all the buildings in their path to ascend to the next level and eat people and destroy cars, helicopters, boats, and anything else you can think of for extra points.

With that description, I’m sure you’re asking what the plot of this movie could be, and I’m right there with you. It’s not often that movies have levels or extra points, unless we’re talking about Inception 2: Throwing the Game, in which Joseph Gordon-Levitt and company find out that Leonardo DiCaprio is trapped in the psychological prison that is Indianapolis Colts’s kick Adam Vinatieri’s mind, leading them to traverse many levels of his dreams in order to get Vinatieri to miss a crucial game-winning extra point and break the curse he has over DiCaprio. That is, as we all know, the only exception.

But once again, we don’t know exactly what Rampage will be about, but we do know that The Rock will play George, so he will go ape dung on everybody. No matter what, though, I can guarantee you that Rampage will combine elements of many blockbusters we have seen so far. If you like seeing monsters eat people like in Jurassic World, then Rampage has you covered. If you liked seeing The Rock manage his way around a crumbling city landscape like in San Andreas, then once again Rampage has your back. If you like seeing scantly-clad, half-naked ripped men running around and doing damage like in Mad Max: Fury Road, well, Rampage will exceed your expectations. In the game, whenever a player runs out of juice, instead of dying right away, the monster character reverts back to their human form... which is completely naked. This lasts until they are either brought back by another player, eaten by another player (costing you a life), or killed by anything that can kill a human being (also costing you a life).

So, there you have it. The Rock will bring a video game classic alive to the big screen. Considering he has been in numerous video games himself, this is the best way to twist things around on him. Part of me wonders if he will constantly question if he is in a video game or a movie? Until we get that answered, we’ll keep you posted on additional cast and a release date! Speaking of which, since there haven’t been any co-stars announced, is there somebody you are looking forward to star alongside The Rock in Rampage? Let us know!