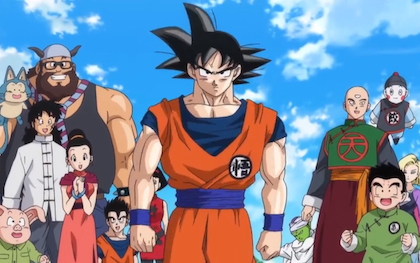 The “Dragon Ball” series has been enjoyed by children and adults around the world for decades now. It originally started as a manga series in Japan in 1985 before being made into a full-blown anime in 1986, and then made its way across the world with the sequel, entitled “Dragon Ball Z”, being the flagship series here in America, gaining traction on the Toonami segment on late at night and afternoons on Cartoon Network in the late-'90s.

With a new film last year, another one this year, and a new video game for “Dragon Ball”, fans around the world had been hoping, as they already had for years, that this time creator Akira Toriyama would actually make another series, and, folks, that is exactly what he’s doing! For the first time in 20 years, coming in this July in Japan, they will be releasing a “Dragon Ball” series called “Dragon Ball Super”, which will abandon the entire plot of “Dragon Ball GT” (a series made after “Dragon Ball Z” without Toriyama’s consent or blessings). Sorry, “GT” fans.

“Dragon Ball Super” will pick up sometime after the end of “Dragon Ball Z” with all your favorite characters, like Goku. It hasn’t been specified exactly how far in the future this new series will take place, but it sounds like it will be pretty close to picking up exactly where “Dragon Ball Z” left off. Like in the past with this series it is a complete toss up if the two most recent movies, Battle of Gods and Resurrection ‘F’, will have anything to do with the series, as many of the films in the past have been up for debate if any them occur in the timeline of the show.

I’m sure you want details regarding when the rest of us in America can check it out, huh? Nobody knows for sure about that either, but another popular anime called “Sailor Moon” recently had a reboot series in Japan, and all of those episodes are streaming for free on Hulu (but with English subtitles only). Maybe a deal like that will be made until Funimation (the company that dubs and distributes all “Dragon Ball” shows in America) gets to work on giving us an English version.

Speaking of Hulu, you can also catch up in time for the series by re-watching all of “Dragon Ball” and “Dragon Ball Z” for free on Hulu without having to beg your uncle’s cousin’s bestfriend’s former roommate’s girlfriend for her Hulu Plus account, and it’s all dubbed in English! Because, let’s be honest, who really likes having to read when watching television?