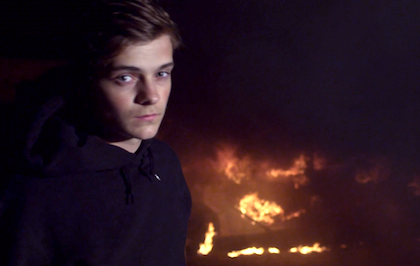 When most of us were 17, the most exciting thing we had to look forward to on a regular basis was probably what we were going to wear to school or what we were going to do on the weekends with our friends… In the case of Martin Garrix, however, there are plenty of more exciting things in his day-to-day life than just regular, teenage woes. It’s not every day you see a youthful, boy-next-door type with a Top 10 dance hit in countries all over the world, now, is it?

Admittedly, the fresh, new, baby-faced DJ and EDM extraordinaire from Amsterdam says he never grew up liking dance or house music in general, but he immediately knew what he wanted to do for the rest of his life when he saw DJ legend Tiesto perform at the 2004 Olympics. The rest is veritable history and now, and the young’un can hold his own amongst other current EDM staples, including his contemporaries Calvin Harris, Steve Aoki, and Avicii.

His shot to fame has given him the opportunity to work on the remix ofChristina Aguilera’s “Your Body,” (like, for real, how many 17-year-olds get to say they’ve done work for Queen XTina?!), but his most popular, smash-hot record (the one that put him on the map) is “Animals”.

If you haven’t heard “Animals” in some club somewhere in WeHo or on the Sunset Strip, you’ve probably heard it while perusing through the Vine app… it’s a popular staple there…

Other cult hits of Garrix’s include “Wizard” and “Helicopter”...

Although a full album has yet to be released of tracks produced by Garrix, the wait won’t be long, because this kid – or young man, rather – has made his presence on the EDM circuit known. And we at YH can tell you that he is surely here to stay!