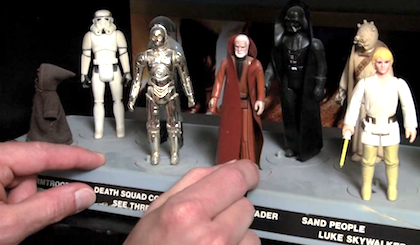 Since a number of sequels, an animated series, and a rumored theme park at Disneyland aren’t enough to keep the Star Wars train rolling, there is now a documentary entirely focused on Star Wars toys, entitled Plastic Galaxy. The film 67-minute-long doc features interviews with former employees of Kenner (the original Star Wars toys manufacturer), as well as experts, collectors, and authors. I’m sure that this film will make many Comic Book Guy-esque collectors very happy!

The film is available for streaming on Vimeo, and in true collector’s fashion, the film will be released on DVD later this year (because streaming is just not the same as owning the film... you wouldn’t stream the toys, now would you??).

I’m hoping the film explains why collectors are so hesitant to take the toys out of their packagaing. I understand that this decreases their value, but isn’t the point of having the toys to play with them? I’ve never kept a single toy in its packaging; many of my toys looked as though they had been mangled by the pre-school children of Toy Story 3. I guess I’m just not a true collector, sigh...

Do you own any Star Wars toys? If so, are they in or out of their packaging?