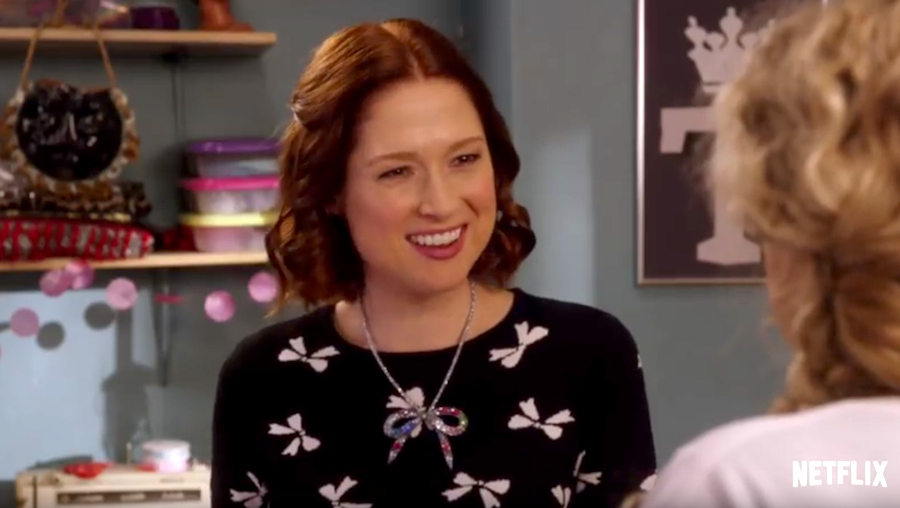 Do they take place in the same fictional universe? That’s the big question with these two shows, “30 Rock” and “Unbreakable Kimmy Schmidt”. With “Kimmy Schmidt” making it’s Season 3 premiere on Netflix less than a week ago, this question has been plaguing my mind as I geared up for it by watching “30 Rock” reruns. The music, the art style, the sense of humor and the overall tone of “30 Rock” is universal with “Kimmy Schmidt”, so they must take place in the same universe. Here are some reasons why:

Mikey the construction worker – Yup, he bridges a huge gap between both shows, as the same actor, Mike Carlsen, first appeared in a small, nameless speaking part in Season 5 of “30 Rock” in the episode “When It Rains It Pours” as an unnamed cat-calling construction worker. By the time we see him in Episode 5 of “Kimmy Schmidt”, entitled “Kimmy Kisses a Boy”, he’s still at the cat-calling game... until he realizes (spoiler alert!) he’s gay.

Knuckle Beach – It’s described in both shows as the toughest neighborhood in New York City. I’m sure you’re probably saying, “Well, yeah, both shows have New York boroughs in them like Manhatten.” Well, ACTUALLY, Knuckle Beach is a completely made-up neighborhood, i.e. it doesn’t exist! But it does in this connected universe.

The Sbarro Family -- While only mentioned in “Kimmy Schmidt”, we actually meet a Sbarro family member in “30 Rock” by seeing the fictional heiress Pizzarina “Zarina” Sbarro. I just find it odd that both shows put an emphasis on the Sbarro family as though they were the Hiltons in the early-2000s. They must be big deals in this universe.

Jeff Richmond – Tina Fey’s own musically talented husband gives it away as he not only does all of the music for both shows but he even appears in both as an accompanist (a person who provides musical accompaniment). In “30 Rock”, he appears as one of the resident musicians for the fictional sketch show "TGS", who is often the brunt of much of Jenna Maroney's jabs. In “Kimmy Schmidt”, he also appears as a nameless, dialogue-less accompanist at an audition Titus goes to in the episode “Kimmy Sees a Sunset”. Maybe Richmond’s character fell on tough times since the cancellation of "TGS", or maybe he’s just between gigs. Either way, it’s a funny commentary on the crew jobs in showbiz, as well as another connection.

Werewolves and Restaurants – In “Kimmy Schmidt”, Titus briefly worked as a werewolf waiter at a cheesy monster-themed restaurant. This is a bit of a stretch but it sounds like Tracy Jordan’s fake son Donald may have finally gotten a terrible business venture of his to take off. In “30 Rock”, all of Donald’s ideas were awful, but Tracy would constantly fund them. This could be the one that finally worked! Plus, it’s no coincidence that Titus is a werewolf after “30 Rock” had been making werewolf references for years, as well as gave us this awesome song by Tracy called “Werewolf Bar Mitzvah”:

Sadly, creator of both shows Tina Fey came forward and said they take place in different universes, but there’s so much that make it seem like it’s not. Her main reasoning is that actress Jane Krakowski plays the main supporting roles of Jenna in “30 Rock” and Jacqueline in “Kimmy Schmidt”. Plus, Tina Fey played main “30 Rock” character Liz Lemon and the supporting roles of Marcia Clark (real OJ attorney) and Andrea on “Kimmy Schmidt”. But plenty of times in the past, we as the audience have willfully ignored the creator to make shows and movies better for us. And seriously Tina, give Tracy Morgan a cameo as Tracy Jordan on “Kimmy Schmidt” already!