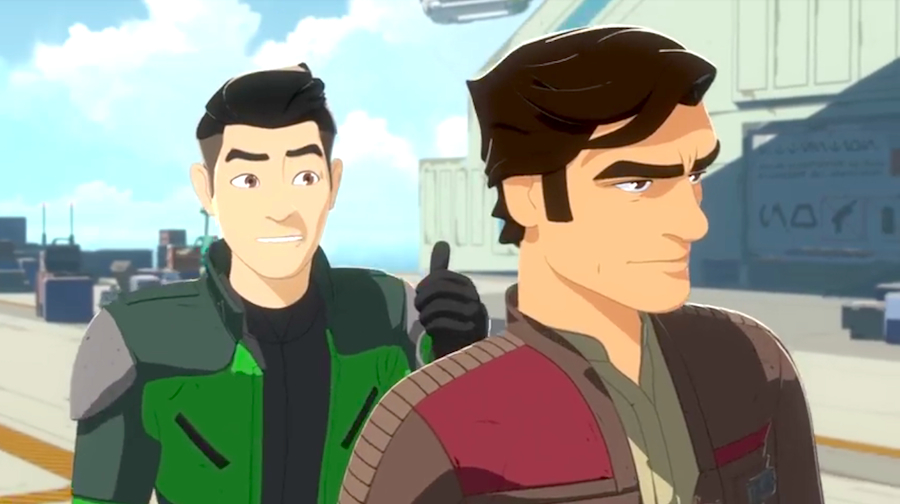 Back in April, we reported on the terribly exciting announcement that a brand new Star Wars animated series was coming to the Disney Channel which takes place just before the events of the first film of the Sequel Trilogy, The Force Awakens. This news was pretty exciting not just because we would get a peek into the background and rise of the First Order, but we would also get to see more of some of our ST faves, including BB-8, Poe Dameron, and Captain Phasma (the latter 2 being voiced by the actors who play them in the movies, Oscar Isaac and Gwendoline Christie, respectively)!

In the 4 months since, we’ve been dying for any additional info, like a premiere date or any kind of concept art. Today, Disney finally gifted us with both in the form of a first teaser trailer for the series!

As you can see, the animation style is way different from other Star Wars animated shows, like “Clone Wars” and “Rebels”. Dave Filoni, the mastermind behind all 3 of these series, opted for more of an anime-style with this one, which to be honest feels a little jarring at first, but I have to admit it looks great!

We also don’t get too much in the way of a plot yet, other than "Overly Plucky Pilot Who Wants To Prove Himself Gets The Assignment Of A Lifetime… If He Can Get Along With His Ragtag Team Of Rebels!" Yeah, pretty basic and not much to go on at this point, and it definitely looks like it’s geared toward kids, but I am hopeful that even folks like me – AKA Adults Who Are Probably Way Too Old For This Nonsense – will be able to enjoy it too. Besides… POE, you guys!!!