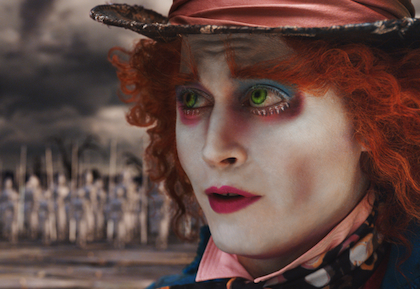 Johnny Depp and Mia Wasikowskaare about to follow a certain tardy white rabbit once more... Disney has announced plans for Alice in Wonderland 2, a follow-up to the 2010 film Alice in Wonderland. Directed by Tim Burton, the first Alice starred Wasikowska as the titular heroine and Depp as the Mad Hatter, and both actors will reprise their roles in the sequel. Lewis Carroll first wrote Alice’s Adventures in Wonderland  in 1865 and later penned a sequel,Through the Looking Glass, in 1871. Both books were used as inspiration for Burton’s film, so it is a little difficult to tell what exactly will be left for this movie sequel to cover.

Burton will not return to direct Alice in Wonderland 2; that particular honor will go to James Bobin, who co-created the hit show “Flight of the Concords” and directed Disney’s The Muppets. However, the new film will be penned by the original scribe, Linda Woolverton. As of now, no plot details have been revealed. It will be interesting to see how different this film looks and feels from the first one. Bobin has a very different directing style and eye than Burton, so there is a high chance that we will be in for a bit of a more unique ride this time. Alice in Wonderland 2 is set to be released during Memorial Day weekend 2016.

In the meantime, Disney is currently working on bringing another classic tale to life. Jon Favreau will direct a live-action adaptation of Rudyard Kipling’sThe Jungle Book, which is set to be released on October 9, 2015. Favreau most recently directed Iron Man and Iron Man 2, so there is a chance that this version of The Jungle Book may be a bit more action-packed than previous versions. Favreau, who also helmed the holiday comedy Elf,has stated that he wants the film to be a bit more family-centric mixed with mythical elements. There is no word yet on casting (John Goodman has to play Baloo, right?).