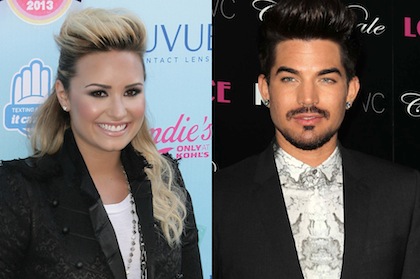 Great news, Gleeks! The very talented Demi Lovato will be joining the “Glee” cast for a six-episode arc this fall!

Demi will be working around her “X-Factor” schedule to be on the Fox series, and If you ask me, she will make a great addition to the show! She will not only be able to use her extensive singing abilities but will also channel her days on Disney’s “Sonny with a Chance” to show off her acting chops.

But Demi isn't the only artist with amazing vocals who will be joining the cast -- "American Idol" finalist Adam Lambert will also be on the show, but his role is being kept a bit more secretive.

“Glee” has had a history of huge stars gracing their presence on the show and I have no doubt that both Demi and Adam will live up to expectations for “Glee”. Let’s take a look back at some of Glee’s amazing guest stars from the past!

- Gwyneth Paltrow played Holly Holliday, a short-term love interest for the adorable Mr. Schue. She showed us that her husband, Chris Martin, isn’t the only one in the family who can sing.

Gwyneth Paltrow - Forget You - Glee from niky2206 on Vimeo.

- Neil Patrick Harris was also in an episode of “Glee” playing the role of Will’s high school nemesis. The rivals performed an epic rendition of Aerosmith’s "Dream On".

There have been plenty of talented stars of different types on the show and these were just a few of my favorites. I can’t wait to watch the next season and see who will be joining Demi and Adam as guest stars on the show!

On a sadder note, it will be interesting to see how “Glee” will continue without the late Cory Monteith. Our thoughts and condolences go out to his family and friends. It’s almost impossible to think of “Glee” without thinking of Cory. Check out his best performances from “Glee” here.

Check out the promo for Season 5 of “Glee”, premiering on Thursday, September 26!