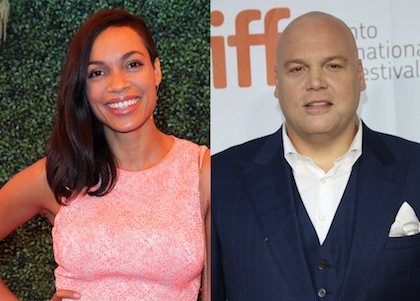 At last week's New York Comic-Con, amidst news of cartoon shows distancing themselves from terrorist organizations, some big news from Netflix may have slipped past some people. The streaming service revealed some more cast members for their upcoming live-action Marvel superhero drama “Daredevil”, announcing that both Rosario Dawson and Vincent D’Onofrio will have major roles.

Originally, rumors surrounding Dawson suggested that she would be playing the role of Elektra, but that was revealed to be false, as we now know that she will be a more obscure character known for supporting Luke Cage in the comic book world named Claire Temple, who, sside from being a love interest for Luke Cage, is known for being a pretty top-notch New York City doctor. As mentioned at NYCC, Temple’s role is actually switched to being a nurse working the late shift at a hospital. Daredevil is known to prowl the city at night, so it’s safe to say we’ll be seeing Rosario quite a bit on Netflix. But could this mean that there is a possible set up for a Luke Cage appearance?

Vincent D’Onofrio, on the other hand, will be playing the show’s lead antagonist, Kingpin, mainly known for his bald head, all around huge figure, and for being, as his name implies, a crime lord. His actual name is Wilson Fisk, and that might be an important detail to keep in mind when watching the show. Kingpin has always been known to be just a straight up villain, but with the way things were sounding at the event, and the fact they have hired D’Onofrio, there’s a big possibility the show will build up to his villainous behavior, instead of having him come out swinging from the start.

To round things out, British actor Charlie Cox (Stardust, “Boardwalk Empire”) will be playing Daredevil himself, Matt Murdock, and “True Blood” alum Deborah Ann Woll will play Murdock’s future love interest, Karen Page. There’s no official announcement for a release date, but we do know it won’t be out until sometime in 2015. So, no worries, you’ve got plenty of time to finish up on Netflix’s recently-added “Gilmore Girls”. Don’t deny it. We know you’re watching it.