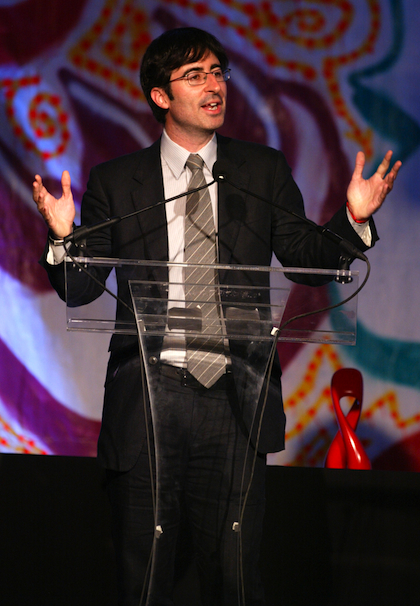 To all my fellow Jon Stewart fans out there, I have some good news and I have some bad news.

GOOD NEWS: Jon is directed his first feature film! Hooray! We’re so glad to see him branching out!

BAD NEWS: He’s taking the entire summer off from “The Daily Show” to do it.

Directing is a harrowing gig, y’all; it’s not like acting in a film, which several TV stars have been known to do even while continuing to shoot their series. There’s no way Stewart could possibly put in the hours to helm a full-length movie AND shoot a daily talk show. But that doesn’t mean “TDS” is going on hiatus with him! Nope, starting June 10, correspondent John Oliver will be stepping in for Jon as host. Regular “TDS” watchers know Oliver as the plucky British comedian who often goes on tirades about his native land while simultaneously managing to blend in with us Yanks seamlessly in field pieces concerning American politics. So, basically, John Oliver will be Comedy Central’s answer to Piers Morgan for three months.

Meanwhile, the project Stewart will be taking on might come as a surprise – he will be scripting and filming a dramatic adaptation of Maziar Bahari and Aimee Malloy’s nonfiction book Then They Came For Me: A Family’s Story of Love, Captivity, and Survival, renamed simply Rosewater for slating purposes no doubt. The story recounts Bahari’s arrest and imprisonment in Tehran for 118 days; the truncated title refers to the nickname Bahari bestowed on his abusive interrogator, who regularly wore the scent.

Sounds… really intense. Yes, the same guy who smoked weed with Dave Chappelle in Half-Baked and got stabbed in the eyeball in The Faculty is getting super-serious in his directorial debut. It’s certainly one of the most intriguing career evolutions in Hollywood – a guy who started out as a stand-up comedian and goofball host/correspondent for MTV is now one of the most trusted names in political satire, if not political punditry in general. Even “The Daily Show” itself began as your run-of-the-mill satirical news show and featured just as much, if not more, Hollywood gossip as political commentary. You’ve come a long way, Jonny Baby!