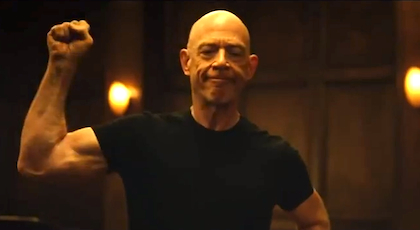 On Sunday, February 22nd, 2015AD, 8 films will go head-to-head in a battle for 1 million dollars and a chance at true love. Okay, that’s not entirely true, but for a moment, the 87th Annual Academy Awards Ceremony sounded like it was going to be a little more interesting than it’s predecessors. Well, in every lie there is a small nugget of truth, and 8 films are indeed battling it out on a magical Sunday evening for the honor of being named Best Picture of 2014. In the past, I always meant to see all of the Best Picture nominees in order to make the competition more exciting, but have always failed to do so... until now. This time, it’s going to happen, and you lucky so-and-sos are coming along for the ride, as I examine every Best Picture nominee to find out just why it is that they are worthy of such a highfalutin' honor.

The first nominee, for your consideration, is one of the best-reviewed movies of the year, and a film that I had been dying to see for quite a while: Whiplash. This movie tells the story of a young drumming student named Andrew Neiman (Miles Teller) who is attending one of the most prestigious music conservatories in the country. His dream is to be the greatest jazz drummer in the world, and while that might sound like reaching for the stars a bit too much, his dream gets all the more closer to reality when he comes under the tutelage of Terence Fletcher (J.K. Simmons). Mr. Fletcher is a conductor at the Schaffer Conservatory and a man who specializes in recognizing the potential in young musicians. The only problem is that, once he takes you under his wing, he’ll beat you bloody with it until you either become the best musician you can possibly be, or until you simply quit.

I’ll be completely honest with you when I say that I always find it a little daunting to talk about films like this. I mean, how can mere words ever hope to reflect the level of emotional craftsmanship that takes place during the 107-minute running time of this film? It’s the kind of film that asks questions and draws the audience into a dialogue that is subtly happening in between the great flashes of emotion that tear across the screen. "What does it mean to be great?" This is one of the questions that the film asks, and at the end, I’m not sure if we exactly get an answer. But we are at least allowed a glimpse of greatness, and that itself is something of a relief in such a dark and intense film. Was this great talent that Andrew has always been a part of him, or was it a product of long sleepless nights spent sitting in front of a drum kit while trying to emulate Buddy Rich? Most people will say that it always comes down to hard work, but if we’re all being honest with ourselves, then we’ll own up to the fact that it goes deeper than that ever-so popular mantra of “Practice Makes Perfect”. And that is where Mr. Fletcher comes in, for digging deep into the hearts and souls of his students happens to be his speciality. To him, there is no line that isn’t worth crossing in order to achieve perfection. It’s an interesting point of view coming from a man who, we find out later, isn’t actually that good of a musician. He’s not a bad one either, but the idea of being merely acceptable is probably a sickness within him that he is temporarily able to soothe when he stands in front of Andrew and the rest of the band. He can recognize greatness, but he cannot achieve it himself, and so Fletcher tells himself that his own greatness comes from being able to draw it out of other people. It’s a little more than sad, but also kind of true. It’s always a bit unsettling when it turns out that the “villain” might be right. But it just goes to show you just how powerful a film can be when it holds up a mirror to life. When do you know that you’ve made it? This is another question possibly answered in a moment of cinema filled with incredible power, high tension and beauty.

Out of all the Best Picture nominees this year, Whiplash might appear to be, in some sense, the "smallest" because it is not dealing with great figures in society, war, or historical events. But its themes of personal and public validation are universal ones and carry with them a power that allows for this film to stand toe-to-toe with any other film released this year. Miles Teller is an amazing actor who flawlessly allows for the vulnerability, anger, and determination of his character to carry the audience on a dark journey that may or may not end with a tinge of hope and inspiration. And then there is J.K. Simmons. This man is going to win an Oscar in a few weeks. Every word, every movement, and every gesture that makes up his character is executed with a perfection that was downright scary to watch at times. He is so deserving that his Oscar should be holding an Oscar, for god’s sake. Oh, and let’s give it up for Paul Reiser who turns in a wonderful performance as well.

February 22 is just around the corner ,and if you haven’t seen any of the Best Picture nominees, then I suggest you get to work. And since you took the trouble to actually read this entire article, then you might as well start with Whiplash. It is an amazingly powerful film and one helluva piece of competition for all of the other films vying for that oh-so special distinction of being the named Best Picture of the Year.