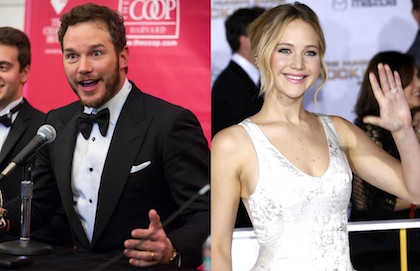 Let’s just start this off by assuming that everybody knows who actor Chris Pratt is by now. If you haven’t heard of him then, you have never seen “Parks and Rec”, Guardians of the Galaxy, The Lego Movie, the trailer for Jurassic World, or the new Indiana Jones rumors. If you haven’t heard of Jennifer Lawrence, then you’ve never seen--Wait. Let’s stop right there. Everybody knows who J.Law is.

With their most recent films, the two have been dubbed the highest-grossing actors in Hollywood today. What’s the next step for these two? Well, to star in a movie together, of course! It’s early, but the negotiations are happening for the two to star together in a science fiction love story entitled Passengers.

Not a whole lot aside from the basic plot is known as yet, but if you look up the short story Passengers by Robert Silverberg, you’ll find a fascinating story about body-snatching. The only problem is that apparently Silverberg’s story isn’t what the movie is going to be about. The titles and both stories being science fiction are merely coincidences. The film will instad follow a spacecraft making a 100-year-and-some-change journey around the Universe. If this film follows the basic romantic-comedy formula, this journey could just give Pratt enough time to gather the courage to ask Lawrence out for a cup of coffee at the mess hall.

There have been so many pairings like this over the years that have worked. We’ve had Richard Gere and Julia Roberts couple up on screen. There’s also been Hugh Grant and Julia Roberts...  Look, there’s a lot of Julia Roberts, but I swear there have been others! They’ve also all worked out really well for everyone involved, therefore the combination of Lawrence and Pratt should prove to work out well. Plus, the two of them seem like fun and funny people in general.

Talks about the movie are in place and the screenplay is already written too. Its author is one of the writers of Prometheus, Jon Spaihts. If you remember Prometheus, and whether you liked it or not, part of the plot involved two people in love in space and the miracle of life they create. Well, in the case of Prometheus, it wasn’t the best miracle since it kind of (SPOILER ALERT) resulted in the deaths of many people.

All in all, I think this is a great idea. If we count the Hunger Games as science-fiction, then both Pratt and Lawrence already have sci-fi experience under their belts. They both are also known to draw in a crowd. Who could argue with any of this? It sounds like a great way to get people to go to the movies, and hopefully it’ll make people want to stay.