COUNTDOWN TO OSCAR: 'The Imitation Game' 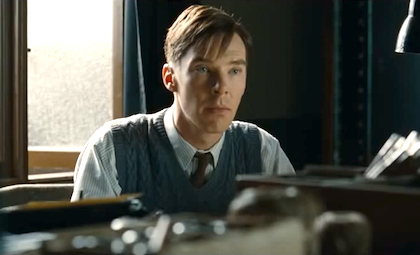 I think I’m not alone when admitting that I had never heard of Alan Turing prior to the release of TheImitation Game. It’s a strong reminder about the power that film can wield when it not only makes you aware of unfamiliar historical events or figures, but it sparks a desire within you for further knowledge outside of the poetics of a screen story. The Imitation Game is one of several films nominated this year that deal with war and important people in history, and this Sunday, we will see if it can defy the odds and take home the top prize of Best Picture for 2014.

The Imitation Game, as you might have guessed, tells the story of famed mathematician Alan Turing and his life and times before, during, and after World War II. As England’s war with Germany rages on, a group of cryptologists, including Turing, are assembled by the British Government to figure out a way to break Germany’s ingenious communications encoding machine known as Enigma. Turing immediately decides that the only way to defeat this masterful machine is by creating another machine with which to do so. And so Turing sets about creating what is essentially the world’s first digital computer in order to end the war and save millions of lives. As Turing builds his machine, we get glimpses into the personal life of this troubled genius who would go on to be one of the most important figures in our history, but not before being vilified by the very people he was trying to protect.

This is a solid film that draws it’s strength from the absolute magnitude of its subject matter. Perhaps more than any historical piece that I’ve seen in recent years, The Imitation Game completely shocked me by revealing a character whose influence on our life and times can hardly be calculated. The man practically invented modern computer science and is the “father” of the digital computer and artificial intelligence. His and his team’s efforts in breaking the Enigma code are said to have shortened World War II by 2 years and to have saved 14 million lives. Countless generations across the globe are alive today because of Turing’s work; not to mention that the computer that you’re reading this on right now might not exist either. But as it often is with great men, they are almost never quite recognized in their own lives for their accomplishments, and Turing was no exception. In 1952, he was arrested for being a homosexual and given the choice to either serve two years in jail or to take hormones to “cure” him of his sexual preference. One of my favorite quotes by Oscar Wilde, and one that I’ve used before, is “Each man kills the thing he loves”. Society as a whole owed Mr. Turin a lot of love, and it’s unfortunate that he did not live long enough experience it.

Such a powerful story, and one with such gravitas, needs something or someone that can effectively harness the material so that it is given its proper due. The narrative functions well, and the screenplay is pretty darn tight, but it is Benedict Cumberbatch who truly elevates this material into something Oscar-worthy. Cumberbatch is the beginning and the end of why this film works. He has taken the somewhat overused character of the eccentric and hard-to-work-with genius and invested it with what can only be described as a truly rich and complex soul. Turin was a man who had difficulties communicating with people, and this may be why he found comfort in mathematics, because there is a certain truth to numbers whereas words and the meanings behind them can be misinterpreted. He has an idea that machines can be built with the ability to think. He has spent most of his life alienated from other people, and his sexual orientation makes him less human in the eyes of the society in which he lives. He is trying to rationalize his own humanity, and if he can create a machine that can think, albeit differently from people, and is accepted by people, then perhaps he himself will one day be accepted as a human being regardless of the fact that he thinks differently. You need more than words to convey this kind of deep sorrow and feeling, and Cumberbatch gives it that certain indescribable something that makes his portrayal of Alan Turing one of the best performances of 2014. Come Sunday night, we will see if this incredible leading performance coupled with a smart screenplay about one of the most important times in our history is strong enough to take away the most coveted prize in the American film industry.