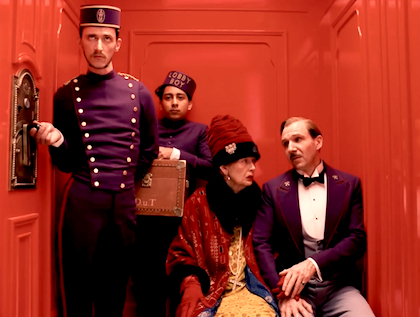 Wes Anderson's The Grand Budapest Hotel is up for the Big Award on February 22nd, and as far as deserving films go, this one is right there at the top. Out of all the Best Picture nominees, this was the first one that I saw, and immediately the bar was raised to an incredible height. Anderson has once again constructed a masterpiece of filmmaking that incorporates his trademark storybook visuals as well as his penchant for examining some of the more darker aspects of humanity. Mr. Anderson has also again assembled a stellar cast, this time being led by the superb Ralph Feinnes in the role of Monsieur Gustave H.

The story of The Grand Budapest Hotel is ultimately told in a way that strongly reminded me of Inception when I first saw it. At the start of the film, a young girl approaches a statue of a famed author, and after placing a trinket (a key of some sort) upon the statue out of respect, she begins reading from the novel The Grand Budapest Hotel. We then go back in time to when the famous author (played by Tom Wilkinson) was still alive, as he begins to tell the story of how the book came to be written. As he is speaking, the film goes further back in time, and we are still getting information from The Author, but now it is a younger version of The Author, (played by Jude Law). The Young Author begins to tell us about the time he stayed at The Grand Budapest Hotel and how the hotel had become a shell of its former self. The Young Author is then introduced to an older gentleman by the name of Zero Moustafa, who turns out to be the owner of The Grand Budapest Hotel as well as a former employee. We then shift our point of view for the final time as the rest of the film is now recounted from Mr. Moustafa’s POV.

Once the film finally stops diving down, it begins it’s true tale, which is that of young Zero Moustafa (played excellently by Tony Revolori) and his adventures in trying to prove his concierge mentor, M. Gustave, innocent of murder. And, mind you, all of this is set in the fictional country of Zubrowka and against the backdrop of a war with a dreadful look and feeling that suspiciously resembles World War II. This is what I love about Wes Anderson films -- he will stretch the boundary between fantasy and reality to a damn near breaking point, and yet, beneath the fairy tale visuals, there are real people with real feelings of hope, pain, desire, and love. This film, even more so than his others, is like a beautifully choreographed ballet in which a constant flow of movement has been paired with a story that shoots ahead like a rocket once it finally gets started. And while this film operates like a finely-tuned engine, it is, in fact, the moments of abruptness, usually coupled with hilarious moments of vulgarity, that, oddly enough, make the film all the more enjoyable, because I believe it is Anderson’s way of allowing for reality to seep through into his world of fantasy without actually breaking the mold that he has created. In other words, in such a grand and almost childlike world, you don’t expect see and hear vulgar things, but the humor and oddness in which they are brought forth keep the film safe from any kind of tonal damage.

Monsieur Gustave is a wonderful physical embodiment of Anderson’s style, and I cannot stress enough just how good Ralph Feinnes is in this. Beneath the over-the-top stylish exterior is a man who is trying to fit in, but in his heart does not believe that he really belongs, and so he never does. Take it from somebody that has worked in hotels for nearly 10 years -- there are days when you interact with your important clients and really feel like you’re on their level. But at the end of that day, it is either the desk you stand behind or a number of other things that keep you from being "one of them”. That’s why M. Gustave chooses only to bed his geriatric hotel guests, because there is little chance that he will be put back in his place when he is with them. And speaking as a member of the hotel industry, I should point out that engaging in personal relationships with guests is strictly frowned upon, as is the film’s blatant disregard for the function of a Do Not Disturb Sign.

So why does this film deserve to win Best Picture? Well, as I’ve said before, I’m sure that all the nominees are deserving in one way or another, but The Grand BudapestHotel is in the running because it’s a beautiful fairytale that cannot be pigeon-holed into any single genre. Oh sure, it’s a comedy, but it is also a highly intelligent look at classism and the innate absurdity of its existence which, interestingly enough, also struggles with the notion of grandeur versus normalcy or functionality. The Grand Budapest Hotel was a thing of beauty in its time and a perfect representation of the glitz and glamour of the upper class. But as time goes by, the hotel’s opulence fades and instead we are left with a functional establishment that merely exists as a hotel for people to stay at. You’ll notice that, in the “modern” segments with The Young Author, there are far more signs placed around the hotel than there were in the past. That’s because, in the hotel’s heyday, it was fine to get a little lost; what you were paying for was an experience and not merely just a roof over your head. Perhaps this is Mr. Anderson’s way of saying that you can embrace the finer things in life without sanctioning the things that seem to go along with them like greed and snobbishness.

I also like that the film manages to comment on the absurdity and senselessness of war itself. “Who is shooting who?” is a question that is asked by an exasperated police inspector played by Edward Norton, and perhaps it’s a valid question that should be asked more often. Wes Anderson is one of the greatest filmmakers working today who has managed to take filmmaking to an entirely different level, and he has done so without ever sacrificing meaning or profundity. The Grand Budapest Hotel was one of my favorite films of the year, and if it walks away with the Oscar, then there will be few who applaud louder than I.