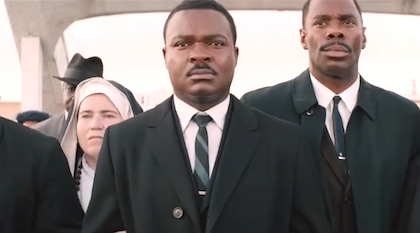 I don’t make it a practice to use the word “masterpiece” carelessly, so you can rest assured that I am not merely paying lip service when I happily apply it to Ava DuVernay’s Selma. This movie is everything I wanted it to be and everything that I was afraid it was going to be. It’s a hard movie to watch at times, but the journey through the hearts and minds of these people, who faced nearly incomprehensible challenges, is well worth the heartache and horror that also has to be endured when watching this film.

Selma tells the story of the famous campaign for Voter’s Rights led by Dr. Martin Luther King, Jr. back in 1965. Regardless of the Civil Rights Act passed in 1964, African-Americans were still being denied the basic right to vote in the southern states. Ignoring President Johnson’s pleas to simply wait a little while until the time was right, Dr. King begins to organize a protest march from Selma, Alabama, to Montgomery. It is a story that spans a very important 3-month period in which people who only seek basic freedom must face horrible violence, moral conundrums, and personal attacks on their daily lives.

I won’t be delving too much into the controversy that has dogged this film; it is my intention to celebrate this film and all that it was able to achieve. History and filmmaking are two different things. History deals with dates and times, while film deals with emotions and ideas. Show me one film that is 100% historically accurate and I will show you a film that is boring and most likely lacking in any sort of empathetic connection with the audience. Facts are important, yes, but positive ideals and the exploration of the morals behind those ideas can easily dwarf most things that you will find in a text book.

What I saw in the movie Selma was not surprising, but it still shocked me nonetheless. I am familiar with this time period thanks to school and other movies, but I certainly cannot say that I know about it in a visceral sense. Hatred is an awful thing, as is ignorance. Hatred and ignorance combined, however, is a Hell on Earth that many people have to endure, and those that haven’t cannot even begin to imagine what it’s like. Selma brings to life the humiliation, fear, anger, and exhaustion of these people and their good fight in such a raw and gripping way that I spent a good portion of the movie angry and choking back tears. Who is Dr. Martin Luther King, Jr. and who are the people standing alongside him? They are human beings fighting for the right to exist in this world as equals, but at what cost? And what is equality? There is a scene towards the beginning of the movie that centers on King and his associates being locked up in jail and a discussion about what this fight will lead to. “We fight for the right to sit at the same lunch counter, but what about the man that can’t afford the lunch, or the man who can’t even read the menu?” It is a question that highlights the incredibly large amount of work that still lays ahead, regardless of whether or not they gain a victory with their Selma demonstration; but more importantly, it further humanizes the individuals who are having the conversation.

Dr. Martin Luther King, Jr. was and still is an amazing symbol of hope, peace, and tolerance for millions of people in this world. People that achieve such a symbolic status are hard to think of as ordinary people like you and me. Did Dr. King have faults? Did he feel things the way ordinary people do? Yes, of course he did, and this film recognizes the good doctor in the way that he himself and the millions like him were hoping to be recognized during the Civil Rights Movement: as a human being. He was a leader, a motivator, a brilliant strategist, a father, and a husband. Was he good at all of those things all of the time? No man dealing with the weight of what he was dealing with could ever hope to achieve that. But he did what he had to do. The ignorant people that spat at him and the ones that still continue to do so have missed out on the fact that Dr. King and his followers were more representative of the spirit of America than they could ever hope to be.

This may sound more like a history lesson than a movie review, but that just goes to show you what an incredible thing that Ava DuVernay was able to achieve with her film. She has given us an in-depth look at people who were willing to lay down their lives if it meant that others could actually start living theirs. Her talent kept her vision true when it could’ve easily dissolved into puddle of half-realized ideas and drama for the sake of drama. I’m sure a fact-checker could point out all sorts of discrepancies, and they are welcome to do so. That doesn't make it any less of an honest movie. I would also like to point out that David Oyelowo deserves an Oscar for this film. I’m not saying that to take anything away from the other folks that we’re nominated, but it’s just a simple truth. Behind those sad, kind, and tired eyes was a storm of emotions that resonated all the more because of the restraint that he was able to exercise in certain scenes. Mr. Oyelowo is a great talent, and I look forward to seeing more from him in the future.

When I left the theate,r I asked myself one question: “How did they do that?” And I don’t mean how did they make that film. I meant how did those people fight for as long as they did? How were they able to sacrifice so much and keep fighting? The movie made me want to know more. In a world ruled by sarcasm and brisk witticisms (I’m just as guilty of those things as the next person), Selma is like a lighthouse in the darkness, and the direction it’s pointing us in is the one where knowledge and hope lives.

Here's the thing: each of the films nominated this year are beautiful and, at times, heartbreaking examinations of the many aspects of the human condition. Well, passion and heartache are not competitions. Great films like Selma do not need awards in order to validate their own existence. Its impact on audiences for generations to come will do that. Although, if it walks away with an Oscar or two, I certainly won’t be disappointed.