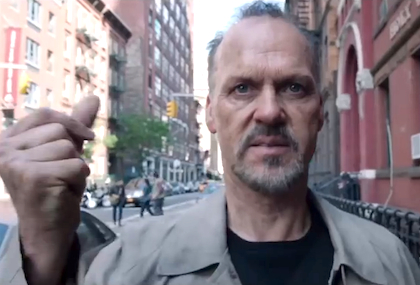 Out of all the films nominated for Best Picture this year, I was looking forward to seeing Birdman the most, and when I finally did see it, my faith and anticipation were greatly rewarded by one fine piece of cinema. Birdman is easily one of my favorite movies of the year and one that I find incredibly difficult to talk about, regardless of how much I have to say about it. Why is that, you may ask? Well, when it comes to Birdman, we are not dealing with a traditional narrative, and as such it’s hard for me (or anyone, I imagine) to discuss it like any other normal three-act structure. The film is an examination of ego and the question of what success really is. Thematically, there is a certain kinship that this film shares with another Best Picture nominee, Whiplash, as both films look at the idea of greatness and what it’s worth in the end. Is being great worth losing your life or the people in it? Some might call that a fair trade, and others may question the overall value of being known as a “great person”.

Birdman tells the story of Riggan Thompson, a washed-up former movie star who was the toast of Tinsel Town back in the '90s when he portrayed the fictional superhero known as Birdman in 3 separate movies that grossed well over a billion dollars. Riggan desperately wants to be relevant again, but on his own terms, and so he sets out to make a name for himself again by writing, directing, and starring in a Broadway show based on the writings of Raymond Carver. Unfortunately for Riggan, nothing seems to be going right with the show, and matters are further complicated when he begins receiving advice from Birdman via voices in his head and the possible manifestation of actual superpowers. In a world dominated by the superhero culture, Riggan feels like he is owed something more than he has received since he basically opened the doors for comic book movies to take over in the first place, and it is that righteous indignation that fuels much of the comedy and tragedy in the film.

This movie is beloved by many, but I have encountered folks that aren’t sure what to make of it. Heck, even I was a bit bewildered when I initially left the theater. The film is shot and edited in such a way where the entire movie looks like one single take. There are very few transitions to help you establish a passage of time, and the end result is like being carried away on a lazy river of sorts. I applauded the shooting style because it ultimately allows you to step into the shoes of Riggan, even though the film is not entirely from his point of view. This is a man who has lost control of not only his career but his entire life. The almost dream-like wandering from moment to moment allows for the film to feel more like a theater production than an actual movie at times, but, more importanly, it serves to illustrate just how far things have gotten out of hand in the life of our core character. He is not so much living life at this point, but instead he is merely having a series of experiences that he has little to no control over. In the above clip, for example, Riggan is finally given an opportunity to express his creative process to a couple of reporters but immediately becomes tongue-tied, and all he manages to do is regurgitate what he just heard before retreating to safe territory by circling things around back Birdman.

This film is not what I would call biographically friendly. What I mean by that is, the film doesn’t waste too much time giving you information on everyone’s backstory or true motivations. What’s ultimately important is who they are and what their varying ideas on success and happiness in this moment of time are, because this moment in time is all that matters. And at the end of the day, isn’t that what fame really is: a period of time in which a person is relevant to a larger portion of the population? Riggan was famous for a time because he played a superhero in a couple of films that entertained people all over the world. But now that he has been somewhat forgotten, he tells himself that his work was not meaningful, so he dives into the “arts” in order to prove that it wasn’t him that became irrelevant but merely his past work. He wants to do something “real” and “truthful” -- two words that tend to carry with them a sense of pretentiousness when they are applied for the purposes of boosting one’s ego as opposed to serving the art they’re being applied to. It’s true that a play or film with deep meaning and cultural relevance will stand the test of time better than some fantastical piece of entertainment that serves only to excite the adrenal glands. But that certainly doesn’t mean that escapist entertainment is completely without merit, as it does tend to offer enjoyment to those that do not find art to be an essential part of their lives. Ultimately what I’m trying to say is that it’s anybody’s guess concerning what is important in this world and what isn’t. It’s these questions and the varying viewpoints on them that ultimately make up the marrow of the film.

Oh, and did I mention how funny this movie is? Everybody straight down the line from Edward Norton to Naomi Watts to Zach Galifinakis is incredible in this film. I don’t mean to gush, but everyone who was nominated deserves to be nominated, and everyone who was not nominated deserves to be nominated. It’s a solid gold cast through and through, but of course the stand-out is Michael Keaton. Keaton is not Birdman. He’s not even Batman. He is Michael Keaton, one of the greatest Hollywood actors of our time, and the idea being tossed around that his character, Riggan, resembles him is completely absurd. Michael Keaton has never been forgotten and is nowhere near washed up. His body of work and current contributions to cinema speak for themselves, up to and including his masterful performance in Birdman. He’s a clever actor in a clever film who has an energy and sense of control over it that is the stuff of legend in Hollywood. And while I am gushing, let me not forget to give major props to Alejandro Inarritu and his talented writers for constructing and executing this amazing movie. Any great material can easily disintegrate in the hands of those that have no clear vision or ambition with which to bring it to life. This is not the case here, as Mr. Inarritu is clearly a true talent to be able to juggle so many complex ideas and assemble them into the highly entertaining film that more and more folks are coming to love everyday.

When I look at films like Birdman, or even it’s fellow nominee The Grand Budapest Hotel, I feel energized to an incredible degree because I am seeing what film is truly capable of. It’s an art form that has no limits when it comes to exercising the imagination and examining the more complex parts of the human condition. Birdman is an excellent example of both of those things and, as a film, has certainly cemented its own place in time as a wholly relevant and genuinely entertaining piece of art that will not be forgotten anytime soon.