Is the Time Ripe for a 'Spaceballs' Sequel? Mel Brooks Says YES! 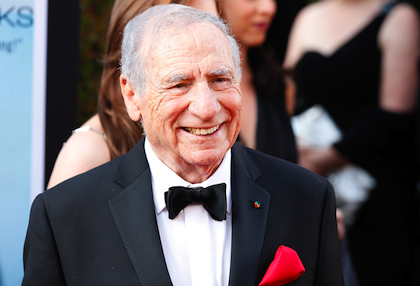 Legendary comedy film director Mel Brooks has been in the news more so in the past year than he has been in a while. He recently had his first comedy special debut on HBO, he made a six-finger hand print in September for the Chinese Theatre in Hollywood, and a documentary on his life entitled Mel Brooks: Make a Noise has been made and is available on Netflix. Now, in his late-80s, Brooks says it’s finally time for him to do something else that he’s never done before -- make a sequel!

Brooks has teased in a few of his movies before that there will be a sequel, but he has never seemed to get around to making them. For example, he made a great historical comedy entitled History of the World: Part 1, which implies right there in the title that aPart 2 would soon follow, but it never actually happened. If you ask him when he’s going to make that one, he’ll probably tell you, “It’ll be out Thursday.” In his Star Warsparody, Spaceballs, Brooks played the all-knowing, tiny alien creature named Yogurt (his version of Yoda, obviously) and told the film’s heroes that they will all meet again in the sequelSpaceballs 2: The Search for More Money.

Recently in an interview on comedian Adam Corolla’s podcast, Brooks spoke about how the time has finally come to make good onSpaceballs 2: TSfMM, what with the emergence of the newStar Wars trilogy by Disney and all. As fun as The Force Awakens looks like it will be, I have to agree with Brooks that there is a lot to work with here. The Search for More Money title, even made in the late-'80s, seems very applicable today with the sale of the Star Wars franchise from creator George Lucas to the giant entertainment conglomerate Disney. We’re going to have more action figures, more video games, more clothing, more shower curtains (one of Star Wars’ most profitable commodities), and let’s not forget more movies themselves! This truly feels like "the search for more money" in a meta sense, which is Brooks's bread and butter.

He does have a few things holding him back on this one, though. For starters, stars John Candy and Joan Riversunfortunately aren’t with us anymore, and Rick Moranis, who played the Darth Vader knock-off Dark Helemt, has since retired from acting. Althought Bill Pullman and Daphne Zuniga are still around and, presumably, available, Brooks has said he would not move forward without the original cast, but he really put an emphasis on not moving forward without Moranis. He even went as far to say that, “I’ve got Helmet in storage”, showing us that he’s really ready to do this. Maybe that’s enough effort to get Moranis to briefly come out of retirement. In fact, let’s check out a video of Moranis as the evil, the wretched Darth Helmet (NSFW):

Brooks has even got a plan for the release. He said he would like it to come out a couple of months after Star Wars: The Force Awakens. “I’d have a big weekend, you know, no matter what,” Brooks stated. No matter what, though, he’d probably just be happy he madesomething. He hasn’t put out a film since he madeDracula: Dead and Loving it in 1995. That’s twenty years now!

I’ve got to tell you, folks, I’m really excited for this one. It feels like this a much better time to make this sequel than when the Star Wars prequels came out. The actual search for more money feels like it’s there, and, unlike the prequels, this one will be moving the Star Wars story into the future, so why not move theSpaceballs story forward as well?

Do YOU want to see a Spaceballs sequel?