"Community" Season 6: The Beginning of the End 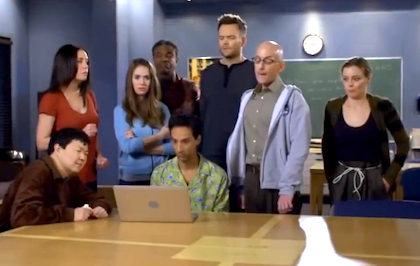 Ever since “Community” was axed by NBC last year, many fans have been worried that we have entered the darkest timeline, and that we may never see a true ending to “Community”. Well, I don’t need to tell any fans of “Community” that the show is coming back, but maybe you haven’t heard that it has already started, and that not just one but TWO EPISODES are currently available on Yahoo! Screen. The season will consist of 13 total episodes that will be released one at a time every Tuesday from here on out.

I can’t express how excited I am that this show is back, and since this is the last season, I am pretty happy about the episodes being released one at a time now. I want this to last as long as it can and not taint it by binge-watching the season all the way through in one sitting. If given the option, though, I would. I’m a weak, impatient Millennial and need constant entertainment. (True story: I can’t go to the bathroom without sending a selfie or watching cat videos.) But I feel like I would end up missing something by binge-watching this season. But to whet your whistle on this new season, let’s take a look at the trailer:

A new Dean-mension in-DEAN. I’m so happy to see that, despite some cast members dropping out and the inclusion of new ones, Greendale is still the same and being kept weird. To top it off, Yahoo! Screen is completely free, so you can watch all the episodes from Season 6 (when they’re all released) for FREE! It’s a show that the people making it must really love if they can cut a deal like that.

Oh, you’re probably saying to yourself, “Great. This guy showed me the trailer and now he’s going to make ME Google the Yahoo page to find this show. Thanks, Internet writer.” While I appreciate your over-the-top sarcasm, I’ve got you covered with a link right here.

Enjoy! And remember, this season may not be the end. Here’s to six seasons and a movie! “Yay, Greendale!”