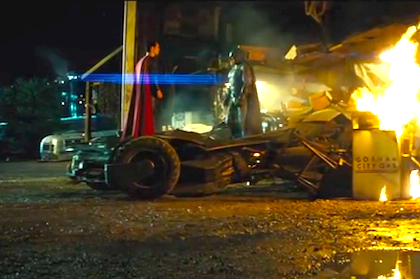 The 2015 San Diego Comic-Con just wrapped up, and, as expected, a few trillion nerds showed up in order to celebrate the wonders of comic books, science fiction, fantasy, horror, and Kevin Smith films about Canada. Young Hollywood was on the scene to report the geeky sights and to bring to you the exclusive interviews from some of Hollywood’s brightest stars. I myself was prepared to head to sunny California to ask Mark Hamill countless questions about Star Wars and what it’s like to be the greatest incarnation of The Joker ever, but alas I was restricted to the greater Orlando area so that I may finish my 10-part series on Florida Thunderstorms which will be released in the coming weeks. Part 1: Precipitation and You is being touted as the next Go Set a Watchman.

But taking into consideration the trailers and footage that were released at this year's Geekstock, there was no way I was going to sit idly by recording cloud circumferences without adding a heap of speculation to the growing mountain of speculation surrounding the nerdiest offerings of this year and the next. So, without further ado, I bring to you a cavalcade of zombies, Jedis, capes, and Holly Hunter!

So, aside from our first glimpse of Wonder Woman (and Gal Godot looks like she will do the role... JUSTICE), we finally get to see the foundation upon which this potentially ungainly and sprawling epic will be built upon. It turns out that Bruce Wayne was, in fact, present in Metropolis during Superman’s battle with his dad’s former golf buddy Zod, and it looks like the collateral damage that went unaddressed in Man of Steel (which ultimately hurt that film) will finally be acknowledged. And aside from the government hearing that we see in the trailer, it looks as though Mr. Wayne will be a focal point for that tragedy. The angry and somewhat unnerved visage of Master Bruce as he looks into the sky and tries to understand just what it is that has happened to him and the people around him is not only an excellent bedrock from which to build this sequel but a poignant shot of humanity that some people might have been missing from this overall story. Once again, a figure has appeared out of nowhere and done harm to people close to Bruce Wayne, and, much like when he was as a child, there was nothing he was able to do about it. This is why Batman, a figure who has been fighting his own battle in Gotham City for 20 years, wants to fight Superman. At least that is what I have gathered from the trailer thus far. Where the hell Aquaman fits into the proceedings is beyond me, and I think I’ll save further analysis for when I actually see the movie. This trailer fulfilled the promise of Jor-El and showed me wonders, so I’ll cap off this section by pointing out a few that managed to awaken my inner drooling fanboy:

- Seeing Robin’s suit with Joker graffiti on it. Looks like the Jason Todd rumor has been confirmed after all. Go read A Death in the Family to find out what I’m referring to...

- Batman using his grappling gun to swing away and narrowly miss a giant laser blast. ‘Tis a moment that reeks of classic comic book goodness and one that is hopefully representative of a larger portion of the action of the film (Batman is interesting because he can actually get hurt and needs to avoid things like giant laser blasts).

- Lex Luthor. I always thought that the casting of Jesse Eisenberg in this role was pretty great, although some balked at it because as soon as the Mark Zuckerberg angle became apparent, it was labeled as “obvious”, which is not actually how reality works. Anywhoo, instead of another middle-aged crime boss, we are getting a young spoiled entrepreneur who seems to have legitimate power and influence over the world of this film. A man hiding in a lair that plots devious plans is all well and good, but a man who can address the world and bend the people’s thoughts through chicanery is far more interesting and an approach that we haven’t seen on the big screen yet. I particularly like the unhinged jealousy we are seeing of a man racked with such ego that he can barely hide the joy in his heart when Superman, a god to the rest of the world, kneels before him.

I’ll go ahead and stop the nerding there and allow my cautiously optimistic alter-ego to take control once again. It’s a long way to go until March 2016, and with the dawning of this trailer, the future of this film and the satisfaction of fans around the globe are looking a little bit brighter.

I’ll give you the CliffsNotes version of what happened in Hall H during the Star Wars: The Force Awakens panel: The cast and crew came out onstage to thunderous applause. They answered multiple questions, and those answers were met with more thunderous applause. The words “practical effects” were used 999 times (although there was probably room for one more) and each instance of the usage resulted in tiny smatterings of applause, which, when added up, equaled intensely thunderous applause. All kidding aside, I’m not going to lie and say that the behind-the-scenes footage shown Friday night didn’t give me chills. It’s a soothing balm to the soul to be able to put aside the overwhelming snark about money, branding, and corporate influence for a short time in order to bask in the glow of creative people practicing their crafts. Diversity was also on the lips of many people in attendance, and indeed it is nice to see British actors finally get a chance to shine in some Star Wars films after all these years. Seriously, though, it’s a big galaxy out there, and it’s good to see the fairer sex and people of other races getting a fair shake. It’s also worth mentioning that the tactile feeling alone that is being touted for this new Star Wars film is going to go a long way in terms of healing some wounds that were cast upon legions of Star Wars fans a few years back. And 100% more Adam Driver and 1000% less Jar Jar Binks should also help the healing process along as well.

Well, it’s just been a lovely experience talking about the two films above, but in the words of the great Olson Johnson: “Never mind that $#!t -- Here comes Mongo!”. The Mongo in question is, of course, "Ash vs Evil Dead", and while the Batman v Superman trailer made me nod my head with a pleasant smile, and The Force Awakens footage made my heart swell to three times it’s normal size, the debut trailer for the return of Ashley Williams and his never-ending battle with the hordes of Deadites that threaten to swallow the souls of every man, woman, and child on this planet made me do the Dance of Joy.

Admittedly, I was a bit cautious before playing the trailer, as the last thing I, or any respectable Evil Dead fan, want is for the return of Ash to be a sad and awkward affair. And, sure enough, my first thought as I watched the initial moments of the trailer were, “This looks campy.” And then my brain kicked in a moment later, and I realized that of course it looks campy, and what the hell was I really expecting?? Evil Dead 2 and The Army of Darkness are camp-fests of the highest order, and they wear that badge with absolute pride and dignity. Factually, the first Evil Dead was a serious effort, but it ultimately exuded an inadvertent campy atmosphere that came from the cheap-but-nonetheless-creative special effects that displayed a true passion for the material at hand. Evil Dead 2 made a sharp left turn into the realm of corniness and hilarity while still managing to attain a backdrop of true dread that allowed for some genuine scares from time to time. But Army of Darkness was one giant cornball fantasy adventure from the beginning that stood on its own ambitious two feet and cemented the character of Ash to our nerdy little fanboy hearts for all time. "Ash vs The Evil Dead" promises us more of the same, and, quite frankly, with a property like Evil Dead, that’s what we really want. We want the good-natured Ash to get his face punched in but then rise above it with the power of his boom-stick, his chainsaw, and something that resembles inner strength. And why do we want these things? Because they are funny.

Sam and Ivan Raimi, with the help of the great Bruce Campbell, have created a bloody, gory, and terrifying world filled with malevolence that, by nature, should have us piddling ourselves in fear. But instead we laugh, and because we laugh, we gain power over the deadly things that go bump in the night. But enough poetry. If you’re shopping around for something groovy to do this Halloween, don’t just shop smart -- shop S-Mart. And for those of you not chuckling at that last sentence, just ignore it and watch the clip below for some good old-fashioned Evil Dead fun: