Comedian Chris Gethard Goes Mainstream: Why You Should Be Excited! 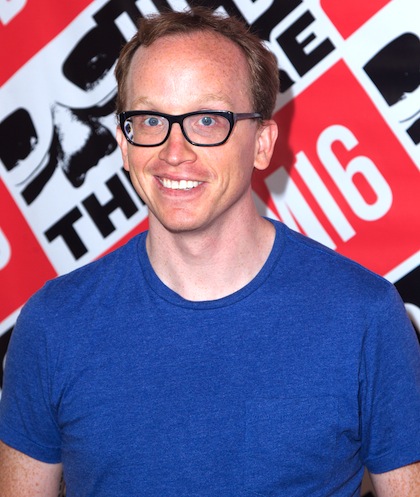 Chris Gethard is a comedian from New Jersey based out of the Amy Poehler-owned comedy club Upright Citizens Brigade in New York City. There’s a chance you’ve heard of Gethard, who also happens to have written an autobiography, and there’s a chance you haven’t. If you haven’t heard of him, then you’re in for a treat because he’s got some pretty cool things on the way.

Gethard’s continuing climb to fame is based mainly on his internationally popular Manhattan public access talk show called “The Chris Gethard Show”, or simply “TCGS”. You’re probably scratching your head thinking, “Internationally popular and public access? This guy don’t know how them words work good.” Nope, I mean it. His little public access show has a cult following not just in America, but around the world thanks to live and archival internet streaming. The basic set up of this late night talk show is that they come up with some themes for the day and let literally anybody call in and talk to them, like Stellan from Sweden (a man who watches the show’s live stream before going to work in the morning in Sweden). They let different comedians from the vast standup scene in New York City come out as different original characters, or, in the case of somebody named Phil Jackson (not the NBA coach), let him read funny and interesting poetry, which may or may not have gotten him his writing job on “Key and Peele”.

It’s kind of hard to sum up the steady insanity of “The Chris Gethard Show”, so let’s take a look at little video from their public access years:

The whole reason I’m telling you about “TCGS” right now is because, after a long period of shooting pilots and trying to get on mainstream television, “TCGS” finally got picked by the Fusion Channel! The show won’t air until May 28, but shooting for the first episode has already begun. Knowing that he couldn’t have gotten this show going without his fans, Gethard put a message out online for them:

What a whack job! But guess what? It actually happened. For nearly four miles, he found other whack jobs that wouldn’t let him touch the ground until he made it from his house to the studio. How delightfully weird.

I’m stoked about this show finally getting to air on mainstream TV, and I hope you are too. If you haven’t seen the show I highly suggest taking a look at any episodes that may pique your interest from the public access years officially archived in the link right HERE! I will warn you, though, even Gethard hates the first episodes they made, so maybe pick something in the middle when the show found its wings of insanity to ride on!