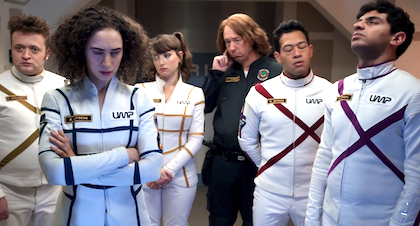 “Other Space” is a show that came out last month on the growing free streaming service called Yahoo! Screen, created by Paul Feig (creator of “Freaks and Geeks” and director of Bridesmaid” and The Heat), about a deeply mediocre and untrained spaceship crew who get lost in another universe nearly a 100 years from now. The whole season is up on Yahoo! Screen, so I just checked out every episode so far and want to tell you why you should too! Here are five reasons in no particular order.

My favorite part of the ST: TOS is that the show had bizarre storylines and funny moments, both intentional and unintentional. I haven’t seen anything else like it until “Other Space”. TOS wanted to be something else and eventually did get more serious, with “Next Generation” and such, but “Other Space” doesn’t want to be serious. Where the original “Star Trek” would play it down or do what it could to get away from laughs, “Other Space” revels in it.

Both the creator (Joel Hodgson) and one of the puppeteers (Trace Beaulieu) of “MST3k” are featured as part of the ship’s crew. Hodgson plays the ship’s engineer who is pretty burnt out from long-term nuclear exposure thanks to a lifetime of working near spaceship engines, which makes sense. (Why didn’t “Star Trek” explore that storyline?) And Beaulieu gets back to his A.I. roots as he voices a robot named A.R.T., who has the consciousness of a vice-riddled billionaire human male. (Fun Fact: the robot that Beaulieu voiced on "MST3k", Crow T. Robot, was periodically referred to as "Art" on some episodes!)

3. There’s nothing else like it on TV right now

America has had a string of successful TV series specifically set in space, but we've never really had a sitcom in that setting before. In Great Britain, there were shows like “Red Dwarf”, but over here, nobody here has tackled this set up. If you love sci-fi, you’ll dig what they do here. And even if you’re not a big sci-fi fan, you still might like it. It’s kind of like “Cheers” in space, as they don’t leave the space ship too much, so it appeals to non-fans of sci-fi too.

If anything, at least watch the second episode where he appears. I won’t spoil anything from it for you. But honestly, anything with Dave Franco (whose big bro James got his big break on Feig's "Freaks & Geeks") is worth watching, amirite?

That’s right! You don’t need to spend any money or even sign in with an account of any kind at Yahoo! Screen. Just pull it up on your laptop or tablet from HERE and enjoy this quirky little show.

Didn’t sell you on it above? Check out the trailer: