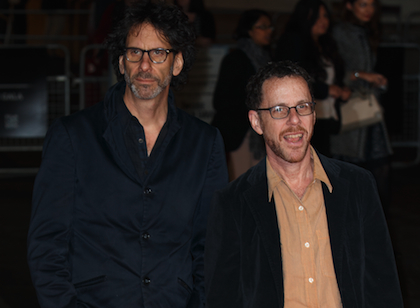 Inside Llewyn Davis is the latest feature film from the pair of geniuses known as the Coen Brothers. This cinematic offering, about a folk singer trying to make his way in New York during the '60s, will be released nationwide on December 20th, although it is currently enjoying a limited release in select theaters. Now I know that, with the advent of the latest Hobbit movie, the news about a small indie flick featuring folk songs and a cat must seem fairly trivial or unimportant. But please believe me when I say that you have to go see this extraordinary film.

Joel and Ethan Coen are two of the greatest creative minds currently working in the movie industry, and I will arm wrestle anybody who dares to think differently. They first came to the public’s attention with their 1984 film Blood Simple starring Frances McDormand, a low-budget and yet excellently crafted film about betrayal and revenge. From there, the Coen Brothers were off and running, and to this day, they continue to mesmerize audiences with their nuanced storytelling and bizarre senses of humor. If you’re not that familiar with their body of work, then I offer to you my top 4 favorite Coen Brothers movies as a way of getting the ball rolling.

I’ve gone back and forth over the years as to which of their films is my favorite, but more often than not, Barton Fink seems to land in the #1 spot. It’s an amazing film about a playwright named (you guessed it) Barton Fink who is whisked off to Hollywood to write a screenplay for a major motion picture. He soon finds out that the City of Angels is more like Hell on Earth as he his forced to step outside of his high-minded shell of integrity and face the true horrors of the real world as opposed to the ones he thinks he is already familiar with. It is a manic and nightmarish film peppered with moments of great comedy and true sadness, and it gets better and better every time you see it, because you’re always learning something new or rethinking the things that you thought you had already figured out. This film and Inside Llewyn Davis are, in a way, distant cousins, because they both deal with artists trapped in a sort of limbo or hellish cycle that seems destined to go unbroken. Inside Llewyn Davis is less manic and more somber than Barton Fink, but both movies feature characters that are somewhat responsible for their own miseries, and the journey undertaken in each film brings the two characters closer to that realization.

This movie is the Coen Brothers' love letter to the hardboiled detective and gangster stories of yesteryear. The Glass Key by Dashiell Hammet, in particular, is the main inspiration for this film as both stories feature a hard feeling and somewhat unlikeable character who goes to great lengths to protect those he’s close to, even if it means destroying his relationship with them in the process. It’s a fantastic film about loyalty that’s filled with great action, intriguing plot twists, dark humor, and wonderful performances from Gabriel Byrne, Albert Finney, Marcia Gay Harden, and John Turturro. This film also features one of the most beautiful film scores ever by Carter Burwell, which you can hear in the trailer below.

This is one movie in the filmography of the Coen Brothers that seems to get overlooked often. It’s probably one of their most lighthearted efforts, but I don’t think that diminishes the quality of the film by any stretch of the imagination. The movie is a wonderful tribute to the Old Hollywood films of the 1930s, and, in particular, to the ones directed by Frank Capra. Much like Mr. Smith Goes To Washington or Mr. Deeds Goes To Town, The Hudsucker Proxy features an idealistic yet simple young man who suddenly finds himself the subject of great fame and success. Once at the top, he gets a good look at the harsh realities of the world that he never even dreamed existed. The main difference between this film and Frank Capra’s movies is that we get to see our hero, Norville Barnes (Tim Robbins), embrace the excess of fame and fortune a little bit. Part of the conflict of the film is our lead character’s journey to rediscover the things that made him our hero in the first place. The Hudsucker Proxy is an excellent little fairytale about the American Dream filled with beautiful visuals and unforgettable characters, and it definitely deserves praise and not indifference.

I’m pretty sure this one is an easy sell. Most people forget that The Big Lebowski went largely unheralded when it first hit theaters back in 1998, and that’s mainly because people thought it lacked the complexity and darkness of their previous effort, Fargo. Instead, people were treated to the antics of a blazed Jeff Bridges, who spends most of the movie bowling and drinking White Russians. The beauty of this film, and one of the reasons why I love it, is that they took their love for film noir and Old Hollywood and simply dressed it up in modern clothing and centered the story around a goofball as opposed to a hardboiled figure. When I was younger, I used to think it would be funny if someone made a movie about some sort of deep mystery in which none of the main characters were actually interested. Jeff Lebowski -- or The Dude, as he prefers -- doesn’t care who anybody is or why anything was done. His level of annoyance and disbelief at the events going on around him is so damn funny that I have a hard time putting it into words. In their previous films, the Coen Brothers have focused on American ideals gone wrong, loyalty and betrayal, and self-discoveries in relation to personal weaknesses and character flaws. This is just a movie about a man who wants nothing more than to get his rug back, go bowling, and to just plain chill. In the grand scheme of things, it may seem like a small and inconsequential story, but it’s one of the best that they have ever told.