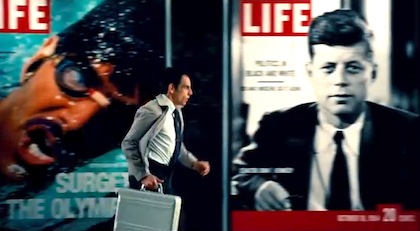 When I first started writing this series, I had always planned on giving any and all negative comments or viewpoints on the films in question their day in court. I find that, sometimes, I agree with some of those Negative Nancys out there, although usually it comes from a place of empathy and has never really made me second-guess any of my choices or observations. But when I started to think about including Ben Stiller’s adaptation of The Secret Life of Walter Mitty on this list, I found that it would be my OWN negative viewpoints which I would be debating!

When the movie was first being promoted back in 2013, I got a glimpse of the trailer and was immediately blown away. And while it bared no resemblance to my beloved 1941 version starring Danny Kaye, this new modern take on James Thurber’s classic story promised myself and the rest of the world an enchanting underdog story with an imagination that could allow for anything to happen.

The film debuted on Christmas Day and promptly received a 50% rating on rottentomatos.com. I was disappointed when I saw that it was getting poor reviews, as that trailer really made it seem like the film would be something special. The movie ran its course in theaters and eventually made its final bow before moving on to DVD, streaming, and whatever else you youngsters out there find so hip and appealing. I missed out on seeing it in theaters, and I wonder now if maybe I was just a little worried that the film might let me down. Well, after a chance encounter with The Secret Life of Walter Mitty on HBO GO, I finally got to see if my expectations would be met.

Well, as the credits of the movie began to roll, I found myself having a really hard time gauging whether or not I liked what I had just seen... which, to me, is a good sign, because it showed that the film was, at the very least, interesting. But, oddly enough, none of my problems with the flick seem to match those of the bigwigs in the critical community. They all sort of complained about how the tone is odd (it’s not) and how the movie doesn’t know what it’s trying to do (it does), and so on and so forth. Let me start by saying that this film was easily one of the most visually creative films of 2013. The transitional shots are filled with an energy and movement that create a sort of visual poetry that actually serves to further the story along, as opposed to just existing as a visual postcard to bridge one scene to another. Ben Stiller, Kristen Wiig, and Adam Scott are all terrific in the film, and the story, I think, blends the comedy and the drama in a nice organic sort of way. It certainly lacks the artificiality of a novice storyteller carefully placing his jokes and poignant moments throughout the movie like a father hiding Easter eggs for his kids. Now I’ll tell you why I had a serious problem with the film, but first I’ll let you enjoy another adorable clip from the movie:

The problem that I had with the film was what I thought of as a lack of any sort of concrete conflict for our main character. As you can tell from the trailer, the story is about a man, Walter Mitty, who is neither brave nor adventurous but instead practical and safe. He lacks the confidence to truly go after the the things that he desires, and this includes a possible relationship with his co-worker Cheryl, (Wiig). In order to save his job as a photographer at Life Magazine, Walter must go on an adventure that takes him to the farthest reaches of the globe. That, of course, sounds all well and good, but I never really understood just what it was that was holding him back initially. We do find out throughout the course of the film that Mitty used to be an amateur skateboarder when he was young but had to quit and take care of his family when his father died. So, basically, he had to grow up early, and as a result, he lost the drive and the zeal he once had to do the things in life that he wanted. I get all of that, but you’ll notice that, in his life, he has an incredibly supportive mother and a loving space cadet of a sister who is also supportive of Walter. In fact, it seems like his life is full of folks who only want Walter to be happy in whatever he chooses to do.

In the 1941 movie, and in the original short story by James Thurber, Walter is surrounded by people that do not take him seriously and are constantly criticizing him. So his lack of confidence is somewhat understandable, as are his constant retreats into his own imagination. But none of that really exists in the Stiller version, save for Adam Scott’s incredibly-bearded villain. I kept going over this in my mind, and after some might heavy thinking and a conversation with YH’s own Katie Marzullo, I somewhat came to a place of peace with this problem. Walter Mitty is in a rut. I know it’s not the most riveting internal conflict to ever grace the silver screen, but when you make a decision to tell a story about an ordinary man, then you must contend with his ordinary problems. Sometimes people just fall into routines and can’t escape them. It’s a simple fact of life, and it’s certainly not the first time a film has ever dealt with that issue. The problem, I guess, that I had was that the rest of the film was so epic in its presentation that it didn’t seem to really match the central problem at hand. But when you really think about it, though, that’s sort of the point of the story. It’s a great big world out there, and Walter sees that, but he calmly lets it pass him by. Our hero is a man who had dreams that he felt needed to be put away for a time, but then forgot to go after them again. And at the end of the day, we find that the story centers on not just the incredible things that Walter ends up doing but simply the fact that he has made the decision to do them.

The Secret Life of Walter Mitty presents to us a simple story with an incredible scope and grandeur. It’s a good-natured film about an ordinary man who goes on a not-so-ordinary adventure. But the true energy and spirit of the film comes from Mitty himself and from the permission he gives himself to explore the roads less traveled. Ben Stiller gave the world a great gift two Christmases ago, and if you haven’t seen it yet, or wrote it off initially, then I highly recommend that you give yourself permission to be carried away by this very funny and very moving film.