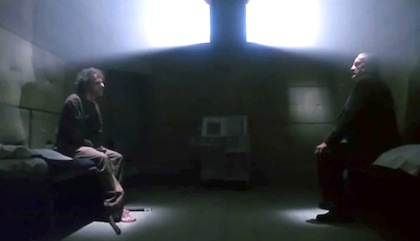 What is it about the 3rd film in a trilogy that always seems to go wrong? It’s like making the sequel was getting away with murder, but after that, making another one is like visiting a crime scene once too often and getting snagged by the cops. But every so often, an innocent victim is swept up and thrown in with the other deviants for nothing more than being in the wrong place at the wrong time. To me, there is no greater example of this than The Exorcist III.

The film takes place years after the events of The Exorcist and features George C. Scott as Lieutenant Bill Kinderman, who was the detective involved in the events of the first film. Years later, he is still mourning the death of his friend Father Karras, the priest who threw himself down a very long flight of stairs in order to save a young girl from the demon trying to posses her. As he acknowledges the anniversary of Karras’s death, a serial killer with apparent religious proclivities begins murdering people in the most brutal and horrific ways imaginable. Kinderman’s quest to stop this madman leads him to the psychiatric ward of a hospital and to a confrontation with someone or something very familiar...

When The Exorcist III was released in 1990, people could not wait to avoid the hell out of it. The main reason for this was because, in 1977, director John Boorman led an astounding cast of brilliant actors down a rabbit hole of confusion and hilarity when he made Exorcist II: The Heretic. The only other thing that I have to say about that movie is that it will not be featured on Cinema Second Chances anytime this century. Years later, William Peter Blatty (the author of the original novel The Exorcist) was approached to adapt his follow-up novel Legion into a feature film. This was a victory for all mankind, as this story was more of a direct sequel and contained 100% less scenes featuring evil grasshoppers and James Earl Jones dressing up like an evil grasshopper. Ok, that is the last thing I will say about Exorcist II: The Heretic. Mr. Blatty wanted to name the film Legion, after his book, because, oh I don’t know, that was the name of the darn story he wrote. Part of him also knew that people might associate this new film with the last one, and he wanted to avoid that particular stigma. Well, the powers-that-be decided to abandon all hope and reason and named the thing The Exorcist III anyway, because it was easier than calling it Legion and then having to explain just what the hell Legion was to everyone. The movie was then made and then promptly destroyed by indifference and avoidance.

And, ultimately, that is just a crying shame, because this is one of the better horror films to come out of the '90s and one that I hold close to my heart. There is a cold and analytical beauty to this film that sort of mirrors the tone set up in William Friedkin’s 1973 masterpiece. The remoteness that you feel is practically hypnotic and, to a degree, a dangerous way to go in terms of a filmmaking point of view, because you risk alienating your audience by keeping them at what feels like a great distance. But Blatty, as I have stated before, ain’t no fool and compensates for these cold stretches with scenes of great warmth between Kinderman and his friend Father Dyer (played wonderfully and hilariously by Ed Flanders).

Not many people know about the great comedy duo of Scott and Flanders. This is not surprising, as their act never existed outside of this film. Well, allow me to tell you that two men onscreen have rarely shown the chemistry and comic chops that these two demonstrated in the Exorcist III. Now, I know this must sound like I am speaking about a different movie. I mean, why would there be such laughter and gaiety in a film where people are routinely crucified and beheaded? Well, I think it is to emphasize the dread all the more. When you see the joy, laughter, and friendship that exist between these two characters, it makes the ugliness of the rest of the film all the more real and tangible. This kind of attention to character detail is not something to be taken lightly and something of a treat when you think of how many other films (especially those in the horror genre) that take the relationships for granted.

Getting back to the cold, beautiful, and analytical distant effect that the movie evokes -- I believe that it is a part of a larger tapestry of theatricality that elevates this film from the depths of horror mediocrity. The warm glow of friendship between our cop and our priest is, again, juxtaposed by the oddness of the plot and the weird interactions between every other character. And if that wasn’t strange enough, you then have this other level of surrealistic fantasy and horror dropped into the mix. What you have with The Exorcist III is what I can only describe as one of the most morosely bright pieces of entertainment that I have ever seen. I can’t even say with certainty that it entirely works, but at the very least it is a fascinating experiment filled with skill and passion, and one that deserves more attention than it gets.

And to answer your question: Yes, that was Fabio.

It is a battle between the forces of Good and Evil that the film hinges on, and due to the artful eye of the director and the stellar cast consisting of George C. Scott, Brad Dourif, Ed Flanders, Jason Miller, and many others, this is a fight that has grit and meaning to it because we are truly allowed to see just what is at stake. If there is an MVP for this film, then it must be Brad Dourif, as his savage monologues truly drive home just what it is to be a soulless and evil being.

The Exorcist III will never be seen as a classic film like its predecessor from 1973, but it is nonetheless a great horror film in it’s own right and the only film to this day made about possession that even comes close to being a worthy successor.