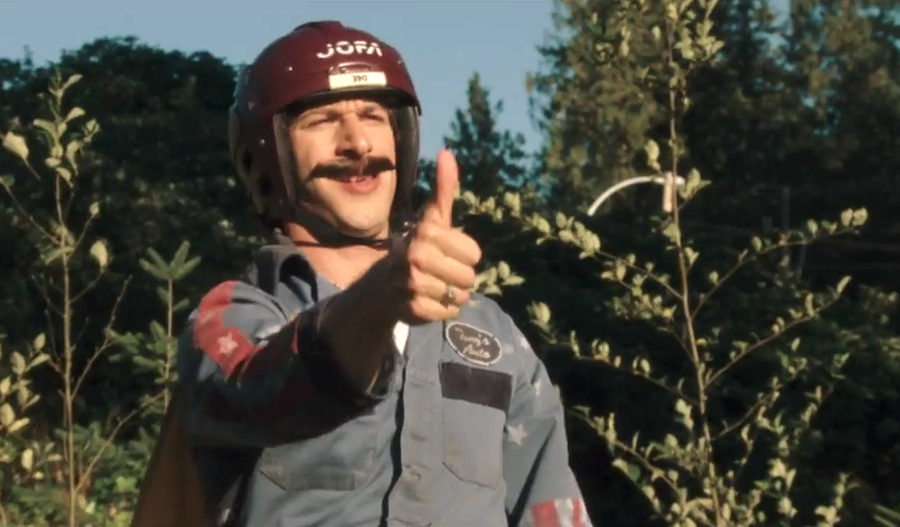 Back in 2007, when they were just on “SNL” together, Samberg and his Lonely Island friends (fellow “SNL” writers) teamed up with Bill Hader (fellow “SNL” cast member) and the hilarious Danny McBride (hasn’t even hosted “SNL” despite heavily requested by the public… blasphemy) for a movie called Hot Rod, written by former “South Park” scribe Pam Brady.

Hot Rod follows the story of a young man named Rod Kimble (Samberg), who grew up admiring his deceased father, a stunt man working with Evel Knievel. Now an adult and still living at home with his mom, stepdad, and half-brother Kevin Powell, Rod performs different stunts, usually on a bicycle, around town with his crew made up of Hader and McBride. Rod has two goals in life: (1) To finally beat up his stepdad, and (2) to perform a jump over 15 buses and make his deceased stunt man father proud. Does he accomplish his goals of stardom and beating up his stepdad? There’s only one way to do find out…

Since I have you on the edge of your seat now waiting on an answer, it’s that you have watch the movie, of course.

I won’t spoil any plot points, but I will tell you that when this movie came out, saying it didn’t do well would be incredibly generous. I will say that I was in high school at the time and I dug it a lot, but even among my friends, it was very divided. At the time that it came out, however, Samberg himself said he believed it wasn’t going to do well but that in a few years it would gain popularity for it’s weird humor, which he described as being more for the upcoming raised-on-the-Internet generation. There is evidence that, in recent years, this movie has picked up a cult following, and when the piles of negative reviews came in at the time of it’s initial release, Samberg (NostraSambergmus) even said, “Oh, we’re on the right track,” citing favorite movies of his like Billy Madison and The Jerk, which got terrible reviews at the time of their respective releases.

With all this talk of bad reviews, I’m sure you’re wondering what made this humor work. Released in 2007, Hot Rod hit theaters well before MacGruber, so it’s truly the first bizarre comedy ever produced by Lorne Michaels. The humor in it is quite surreal, and there is a scene involving the phrase “cool beans”, which you can tell is tailored for YouTube watchers long before much of what they like from YouTube was even established. The story may be pretty simple, but the movie raises a big question that will drive the right person mad trying to figure out, which is, “What the hell time period is this supposed to be?”

I can say that Hot Rod takes place in the mid-west, but when? It’s really a question that can never be answered. There’s a '70s aesthetic, an '80s soundtrack, and 2007 cars… it’s all over the place and jumbled in those aspects. It’s like on set the cast and crew were just throwing things at the wall and seeing what sticks, and it works in the best and worst ways possible. But do questions like "when does it takes place" or "why the hell did they do weird things" really matter? No. It’s funny enough that this all just exists and things happen with no explanation.

So, if you’re a fan of the surreal, the random, and the so-stupid-it’s-kind-of-smart, then Hot Rod is for you. If you’re just a Samberg fan and that type of humor isn’t your bag, ask your friends who are into that humor and then debate if this movie is good or not. I’m on the side that it’s good but I’m sure there are still those who aren’t. But anyway that’s enough ranting about whether Hot Rod is good or not (it totally is). How about you check out the trailer and see for yourself:

Yup, pretty dumb but totally fun! Seriously, check this flick out and don’t forget to hit the theaters on June 3 to check out Popstar: Never Stop Never Stopping: