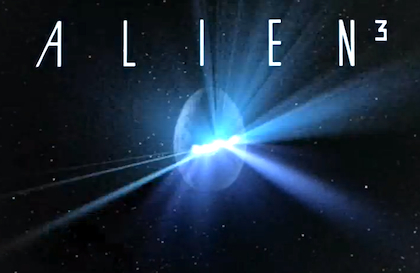 The one science fiction franchise that lies nearest to my heart is undoubtedly the Alien series. Well, to be fair, it’s really just the first three movies, but those 3 movies make up some of my earliest movie memories. It goes without saying that Alien and Aliens are both film classics. The first movie removed all of the gloss and glamour that many of the early sci-fi tales carried with them and introduced the idea of blue-collared space travelers caught up in circumstances way beyond their control. Those circumstances, of course, being an 8-foot tall creature with acid for blood and a second mouth where it’s tongue ought to be.

Seven years after the success of Alien, a sequel debuted in 1986 and showed the world that bigger could be better, as long as there was still some decent storytelling and tender loving care behind the camera as well. Aliens moved away from the space-truckers-trapped-in-a-haunted-house trope and instead took audiences on a rollercoaster ride filled with multiple aliens, soldiers with guns, and a giant Queen Alien which does battle with a Power Loader-encased Ellen Ripley. Aliens is an incredibly fun film and one that does not sacrifice meaning and emotion for the sake of spectacle.

Then 1992 came along, and the world was given Alien 3. Most people consider this the bad one. Well, to many people, EVERY movie after Aliens is kind of the bad one, but Alien 3 has been saddled with the sad honor of being the movie that jumped the shark... or the Xenomorph, in this case. The 44% percent rating on Rotten Tomatoes is certainly evidence of this. Well, I’ve had just about enough of this rubbish. Everyone is certainly entitled to their own opinion and all that jazz, but practically every negative comment I’ve heard or read about this movie holds little to no water. So I’m here to put a stop to all of this mindless bashing of what happens to be my favorite of the entire Alien series.

After the events of Aliens, we find that the Queen Alien had somehow snuck an egg onboard the spaceship Sulaco, and the Facehugger that hatched from it causes a system failure throughout the ship. Ripley and her friends are still in hyper-sleep, and the ship jettisons the cryo-tubes into an escape pod, which crash-lands on a prison planet known as Fury 161. Ripley is the only survivor of the crash and finds that she has now become a temporary resident of a mostly abandoned prison. The remaining inmates are a group of apocalyptic Christian fundamentalists that have found God at the dead-end of space. They view Ripley’s presence as an unwanted temptation but soon find that they will need her help, as a new alien horror has gestated and is now running amok in the cavernous tunnels underneath the prison. The stakes are even higher as Ripley finds out that she herself has become impregnated with an Alien embryo, which turns out to be a Queen. Now she has the task of not only destroying the alien menace loose in the prison, but also the one trapped inside of herself.

Sounds like a real cheerful movie, huh? The biggest complaint, and the most constant that I have come upon while sifting through the reviews of this film, keep returning to the idea that the movie doesn’t do anything new, and that it is merely an overly long chase movie with, albeit, some decent production design that unfortunately lacks a story. Actually, I find that this film actually comes with a more concrete story than any of the other films in the series, and I for one think that it’s quite beautiful in a somber/heartbreaking/horrifying and slightly gory way. For whatever reason, whether it’s God, fate, destiny, or just bad luck, Ripley is destined to combat these terrifying creatures.

Ripley has been alone ever since she heard the screams of her crew-mate Lambert ring out through the corridors The Nostromo in the first Alien movie. She finds temporary camaraderie with the marines in Aliens but they too meet grisly fates. With the menace of the Queen Alien and her entire colony completely destroyed, Ripley thinks that she is finally free to live her life again with her new companions Newt and Hicks. And yet they are torn away from her as well, and she finds herself amongst a group of rapists and murderers who are looking for redemption and see Ripley as a danger to that goal. She does meet Clemens, the prison Doctor, and finds a kindred spirit in a man who also finds himself isolated from those around him. The scenes between Ripley and Clemens are my favorite scenes in the movie becaus,e the more we learn about them, the richer the story becomes. We know where they come from and therefore their ultimate destination is of all the more interest.

And then Clemens is killed suddenly by the Alien. People often chalk it up to just a poorly thought-out death that was done merely for shock value, but I think that it is one of the most powerful moments in the entire franchise. Clemens was her absolute last chance at possibly having a normal life. Their attraction for one another was growing, and Ripley found somebody that she could potentially confide in. She didn’t tell him about her past, but you could see that she thought one day he might become a person she could trust with just about anything. The Alien robs her of that. And in that moment, she knows that she will never know peace in her life until these creatures are destroyed. They are her personal demons, and she must get rid of them no matter what the cost... including her own life.

And please do not even get me started on the amazing Charles S. Dutton’s performance as Dillon, the prison's de-facto spiritual leader. Dillon and the inmates of this prison merely want to live out the rest of their lives in isolation in the hopes of finding peace from the former lives that haunt them. The Alien could certainly be seen as a form of divine retribution. They waited in hell long enough, and now the Devil has finally arrived. But Dillon thinks differently. By killing this creature, they have a chance to actually become useful human beings once again by destroying a possible threat to the rest of the universe. Or, at the very least, they can once again take their fates into their own hands and choose to die on their own terms.

David Fincher directed this film and has pretty much disowned it due to the constant script problems. He said there were days where it felt like he didn’t know exactly what story he was filming. Well, I don’t know what miracle was pulled off, but other than the alien egg’s miraculous appearance on the Sulaco, (I guess the Queen hid it in her back pocket?), none of the behind-the-scenes pandemonium is apparent in the final product. Mr. Fincher, I, and a few other critics out there that are coming to their senses, give you permission to be proud of this film. Your task in putting together the final product might have been laborious and annoying as all hell, but the end result was a great movie that anybody could be proud of!