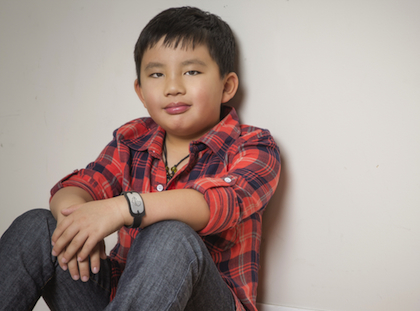 Albert Tsai plays the adorable Bert on one of our favorite new comedies this fall, ABC’s “Trophy Wife.” Bert is the adopted son of Pete and Jackie, Pete’s second ex-wife (the show has a fairly complicated family tree which can best be explained here); he is the baby of the family who plays soccer, crashes after drinking too much coffee, and has recently been spouting off Yiddish expressions.

In real life, Albert is just as adorable as Bert. Like his TV counterpart, Albert enjoys soccer, surfing, and legos. I was quite surprised by how much Albert knows about animals, and he even taught me a bit about our furry friends. I was impressed that when I told Albert I had previously lived in Australia, he knew all about the marsupials that live there and asked if I had been to the Great Barrier Reef. Albert may win for the cutest interviewee I have ever had.

During our chat, we discussed how he makes his cast mates laugh, his favorite animals, and what he plans to be for Halloween:

YH: Tell us a bit about your character, Bert on “Trophy Wife.”

AT: My character Bert is eight years old and he’s the youngest child of the family. He’s the son of Pete and Jackie, Pete’s second ex-wife. Bert is smart, funny and loves animals. He’s pretty much like me. We have a lot in common. The only difference is that in real life, I’m an only child, but Bert’s part of a big family. I like animals a lot too. My favorite animal is a monkey! I also like pandas.

YH: Can you tell us a bit about your very first role?

AT: I guest starred on “How I Met Your Mother”. The very first role I officially booked was Bert on “Trophy Wife”. I was first in a school play. It was a musical called The Musical Adventures of Flat Stanley Jr. I played a doctor.

YH: What is the most fun thing that has happened to you on set?

AT: Occasionally, I have some lines that are tongue twisters. When I say them in my head, it goes through lovely. When I say them out loud in front of a camera, I sometimes mess them up. Once I had a line that was, “I’m her brother from another mother and father.” But I said “I’m her mother from another brother and father.” I said that, and everyone on set started laughing out loud. I like to make my cast mates laugh. We sometimes play games on set. I’m having a really great time on “Trophy Wife!”

YH: You have mentioned that you love to read. Do you have a favorite book?

AT: I like to read a variety of books. I like to read biographies. Once I borrowed a really big encyclopedia from the library, and I really liked reading it because I could learn about a lot of different countries from their past to their present. I like reading about European history and Chinese history. I also liked reading The Magic Treehouse series. I’m also currently reading a series called A-Z Mysteries. There are three kids, and in every book they somehow stumble upon a theft or some kind of mystery, and they solve it.

YH: You have traveled to quite a few different places. Where has been your favorite place you have been to thus far?

AT: My favorite place is Alaska. I loved the amazing variety of wildlife that was there. There are a lot of bears there, like polar bears, brown bears, and grizzly bears. There are also a lot of caribou and moose. I saw a few bears while I was there. I saw five grizzlies, and some black bears and a polar bear at the zoo. The grizzlies there were far away from us, because you have to be 300 feet away from all the bears.

YH: Can you give us any hints as to what will happen on “Trophy Wife” this season?

YH: What are you going to be for Halloween?