Chatting with: The Kids of Disney's "Stuck In The Middle"! 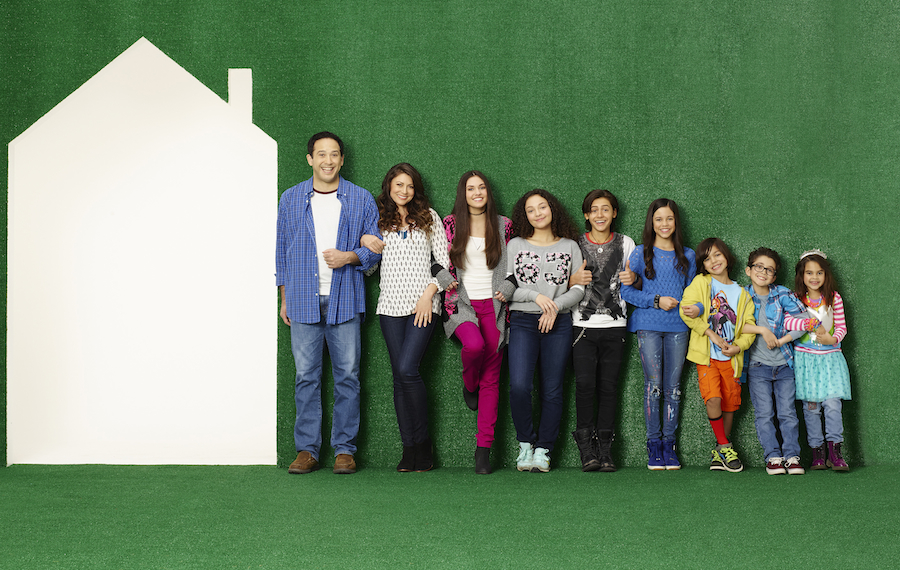 Everyday is certainly a party with seven siblings!

Talk about a show to watch out for! Disney’s new hit series “Stuck in the Middle” is told from the point of view of middle child Harley (played by Jenna Ortega), living life in a household of seven kids who encounter the daily madness and delights of being a part of the Diaz family.

Harley is an engineering wiz, who uses her talents to manage life as a middle child. While she feels that she is sometimes overlooked in favor of her older and younger siblings, she finds that sometimes flying under the radar proves to be both a blessing and a curse when enduring the adventures of day-to-day life with six brothers and sisters, including "Beast" (Malachi Barton), Rachel (Ronni Hawk), Georgie (Kayla Maisonet), Ethan (Isaak Presley), Daphne (Ariana Greenblatt), and Lewie (Nicolas Bechtel).

We got a chance to chat with the kids themselves about their characters and some fun facts about the show! Take a peek:

YH: What’s one way in which you are similar AND different from your character?
Jenna: Harley and I are similar because we are both the middle child in big families and we both love science and are good at negotiating. Unlike Harley, I am not an inventor. I do wish I had her inventor skills... I can't even get a paper airplane to fly.
Isaak: I'm similar to Ethan in the way that we are both creative and we play guitar, sing, and write (although I'm a little better). We are different in the way that I'm more hyper and energetic, whereas Ethan is more laid back and chill.
Malachi: Beast and I are similar, because we both love to take chances, and do fun and crazy things! I'm different than Beast because he's a part of a big family, and I'm an only child.
Ronni: One way I am like my character is that we look alike! Seriously, we both get fed up with our siblings at times but love them in the end. One way I am different is that Rachel is a girly-girl and I am not so much.
Kayla: One way I'm similar to Georgie is that we are both very enthusiastic and both pretty bad at sports. One way we are different is that I only have one sibling, but it would be so much fun to have six brothers and sisters.
Ariana: One way that Daphne and I are similar is that we both are the youngest in our families and we are very creative. Daphne and I are very different in so many ways. Daphne wears crazy outfits and tiaras that never match. She also never takes off her tutus and her hair is out of control. I love fashion and try to have a cool, laidback style. I love wearing skinny jeans, boots, or wedges and cool hats. Like I said, I love fashion. Plus I brush my hair!
Nicholas: Lewie and I are alike in a couple ways. He is quick and thinks on his feet, and that's kind of the way I am. Also, Lewie is a leader and likes to be in charge of things. I am like that too! He doesn't really like people to tell him what to do. We are different in some ways too. Lewie is calculated in getting people to do things but sometimes he's only looking out for himself. I'm a little more considerate of people's feelings. Also, Lewie likes to do things he and Beast have been forbidden to do; the real Nicolas is not that brave.

YH: If you could guest star on any show, what show would it be and as who?

Malachi: I would guest star on Disney XD's "Gamer's Guide to Pretty Much Everything" as a gamer that loves Pac-Man and King Kong.

Ronni: I would love to guest star on "Vampire Diaries" as a young Elena (Nina Dobrev). I love the show and many, many people say we look so much alike.

Kayla: If I could guest star on any show, it would definitely be "Bates Motel" as a motel guest.

Jenna: I would love to guest star on "The Walking Dead" as a zombie. I think the special effects are awesome and I'd love to get to experience that one day.

Isaak: If I could guest star on any show, I'd love to guest star on "Arrow", "Flash", or "Legends of Tomorrow" as a superhero kid that helps one of them save their world/city.

Ariana: I would love to guest star as a spy kid on Disney Channel's "K.C. Undercover".

Nicolas: If there was one show I could guest star on, it would DEFINITELY be "Hawaii 5-0". I love, love that show! I'd fly myself there and work for free. I don't even care if I was an extra!

YH: Have you ever played pranks or been pranked on set?

Malachi: One of the crew members tried to prank me, but it didn't work out because they set it up wrong. I love watching YouTube to learn new pranks, and I prank my mom, my dad, and my friends all the time!

Ronni: I have been pranked on set by Isaak. He loves to jump out from behind walls or corners and scare me to death. I scream like there is no tomorrow. He truly is a jokester!

Kayla: Oh I've been pranked many times! Especially by Isaak, but that's ok, we're going to get him back very, very soon.

Jenna: I personally haven't pulled pranks, but I've helped people pull them before! For example, we have a prankster named Peter on our crew who loves to use set props to prank people. One day, I helped him put a fake lizard under Kayla's car next to her door and a fake bird on her windshield. When she walked outside to leave, she saw the little animals around her car and freaked out. Peter made a deal with me in the very beginning that we wouldn't prank each other.

Isaak: I'm kind of the dignified prankster of "Stuck in the Middle"; I scare and prank the kids all the time. But I always act anonymously.

Ariana: Yes, I have pranked some of my TV siblings by hacking into their phones and taking hundreds of goofy, crazy selfies and posting them on a couple of their Instagram accounts. Takes them forever to erase!

Nicholas: I'm one of the little guys on the show, so I don't really prank people, but there is someone on the show who is a big prankster/jokester. He will pop out of nowhere and say "BOO" or creep up from behind you and make a weird little noise in your ear. All of the girls get mad at him and he makes the moms scream too! I think it's so FUNNY!

YH: What is your favorite/most used emoji?

Malachi: I use the "Me Hungry" Bitmoji all the time, to warn my parents that it's time to eat!

Ronni: My favorite emoji would be the smirk face (Rachel all the way) or the laughing/crying face.

Kayla: My favorite emoji is the blushing smiling face.

Jenna: My favorite ones are probably the laughing emoji or the pink heart emoji.

Ariana: My favorite emojis are the kiss face blowing a heart and the crown.

Nicholas: My favorite emoji is the smiley face with the little black glasses. He looks like me.

Isaak: My favorite emoji is the crying laughing face.

Tune in to Disney Channel this Friday night (March 11) for an all-new episode of "Stuck in the Middle"!