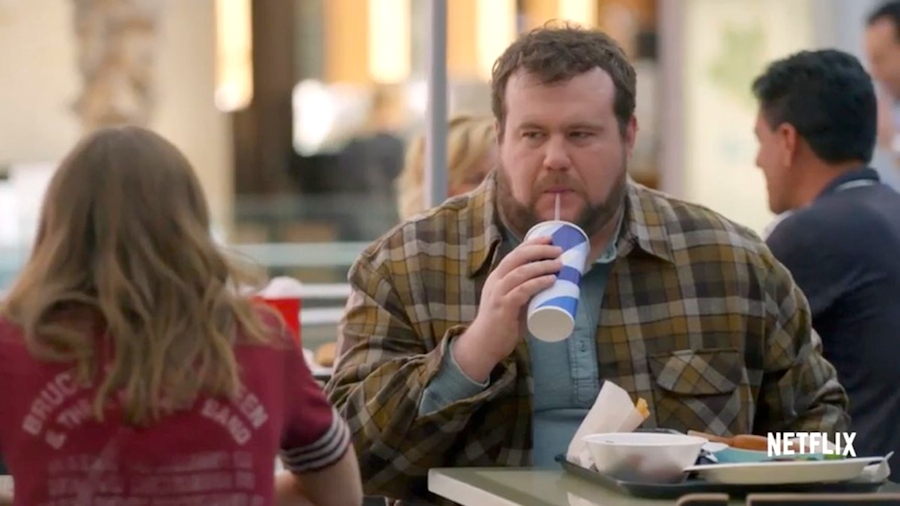 Actor Mike Mitchell plays the most lovable oddball, Randy, on Netflix's oddball romantic comedy "Love". In Season 2, Randy takes on a bigger role as the boyfriend of Bertie (Claudia O’Doherty) and begins to show that he’s stranger than everyone initially thought. Some of the best scenes of the season feature Randy, as he and the rest of the “Love” gang go on a number of adventures throughout L.A.

In addition to starring on “Love,” Mitchell also hosts a podcast with his longtime buddy Nick Wiger, where they review various restaurant chains. Thus far they have ventured to McDonald’s, In and Out, and the notorious Long John Silver’s.

During our chat, Mitchell filled me in on what to expect in Season 3, which chains he actually does like, and guest-voicing on "The Simpsons"!

YH: Randy plays a bigger role in Season 2. How is it being a bigger part of the show?

MM: It was great. I had no idea, besides the fact that I was going to be dating Bertie at the start of Season 2, what my role would be. The character’s a bit of a mess, but he’s a lot of fun to play. It was fun to be this wrench in Gus, Mickey, and Bertie’s perfect little lives. It’s always challenging to take on a bigger role, but Paul [Rust], Gillian [Jacobs], and Claudia are all so good, so I was ready to step up my game so I could hang with those guys. He’s [Randy] a mess, there’s no way around it. But he’s got a big heart.

YH: What will happen to Randy in Season 3?

MM: I’m always afraid of what I can and can’t say. I will say that he thinks with his heart over his head, which is at the inconvenience of every character. I can’t say too much else, but Randy is around. As of right now, he’s not really self-aware. He has to make some changes in his life. We’ll see if he actually makes the changes.

YH: In “Love”, there are parties where the characters get together and write theme songs for movies that don’t have theme songs. Where did the idea for this come about?

MM: As a group of friends, we used to hang out. Paul and some of The Birthday Boys [sketch comedy group] would play instruments and we would sing. I think a lot of it came from that. Also, Paul is in a funny band called Don’t Stop or We’ll Die. Some of it comes from that and some of it comes from just hanging out. It does come from a real place. I’ll give all the genius to Paul. I like that he put it in the show. It makes me smile.

YH: You also have a podcast with Nick Wiger called "Doughboys", where you review fast food chains. Do you now have a favorite chain restaurant?

MM: Doing that podcast has made me like chains less. It made me like fast food less. Since we eat it so much now, it hasn’t exactly become a chore, but it’s like, “Oh God, I have to eat this place this week…” On top of that, I try to eat healthy, so to have this can sometimes be a real pain. But I always like Wendy’s. There are some cool interesting chains that I would have never normally been to had it not been for the show. We’ve been Jollibee and L&L -- places like that have delicious food that I never would have been to. That’s cool to find different places. It’s tough because there is a limited number of places we can go, but then there are also so many chains that we haven’t been to, so this could go on for a long time.

YH: On the podcast, there is a segment called “Roast Spoonman”, where listeners send in nicknames for you. How did this segment come about?

MM: All Nick Wiger. We like to poke each other a bit. This was all Nick trying to find something that would get under my skin. It worked to an extent. Being in comedy for a decade, I feel like nothing can hurt my feelings anymore. The nicknames don’t really hurt my feelings. They’re funny. Nick likes to do them. He really is a genius. He’s a super funny guy, and he loves to mess with me. I sometimes try to mess with him. It doesn’t always work out.

YH: In addition to the podcast, you are a part of The Birthday Boys sketch comedy group. Any plans for a reunion?

MM: We always talk about doing stuff. We’re working on a couple of things, but at the moment, no. We’re all down to work together again. We all get along really well. I feel like we will continue to work with each other, and one day when the opportunity arises, we will reunite once again.

YH: You got to voice a character on "The Simpson" this season. What was that experience like?

MM: I worked over at “The Simpsons” for four years. There is a looming writing strike, and I actually started working there during the first writer’s strike. I was an assistant to the writers. It was great, I loved working over there. So Matt Sellman, who was one of the producers I worked for, was doing a Boston episode. They knew I wore a Celtics jacket every day to work. He had me in mind to do a small voice on the show. Sellman has been on the "Doughboys" podcast and we’ve kept in touch. I love all those guys. They were nice enough to let me come in and voice one of the people in Moe’s. I was one of the obnoxious Boston sports fans. I got to call Homer a “frickin’ doorknob.” I got to channel a 1999 version of myself. It was great.

YH: So you are a Boston sports fan then?

MM: I am. I’m sorry, I apologize for how obnoxious we are. We drive people nuts, I know.

YH: You also own two cats. Have you become a crazy cat person?

MM: I was always a crazy person, and now I own cats. I love my cats. I’ve always loved cats and animals. I didn’t think I was going to have pets, and then they came into my life. They make me very happy. I love the both of them. You know what, if that makes me a crazy cat person, then so be it.

Season 2 of “Love” is now streaming on Netflix. You can keep up with Mike on Twitter!