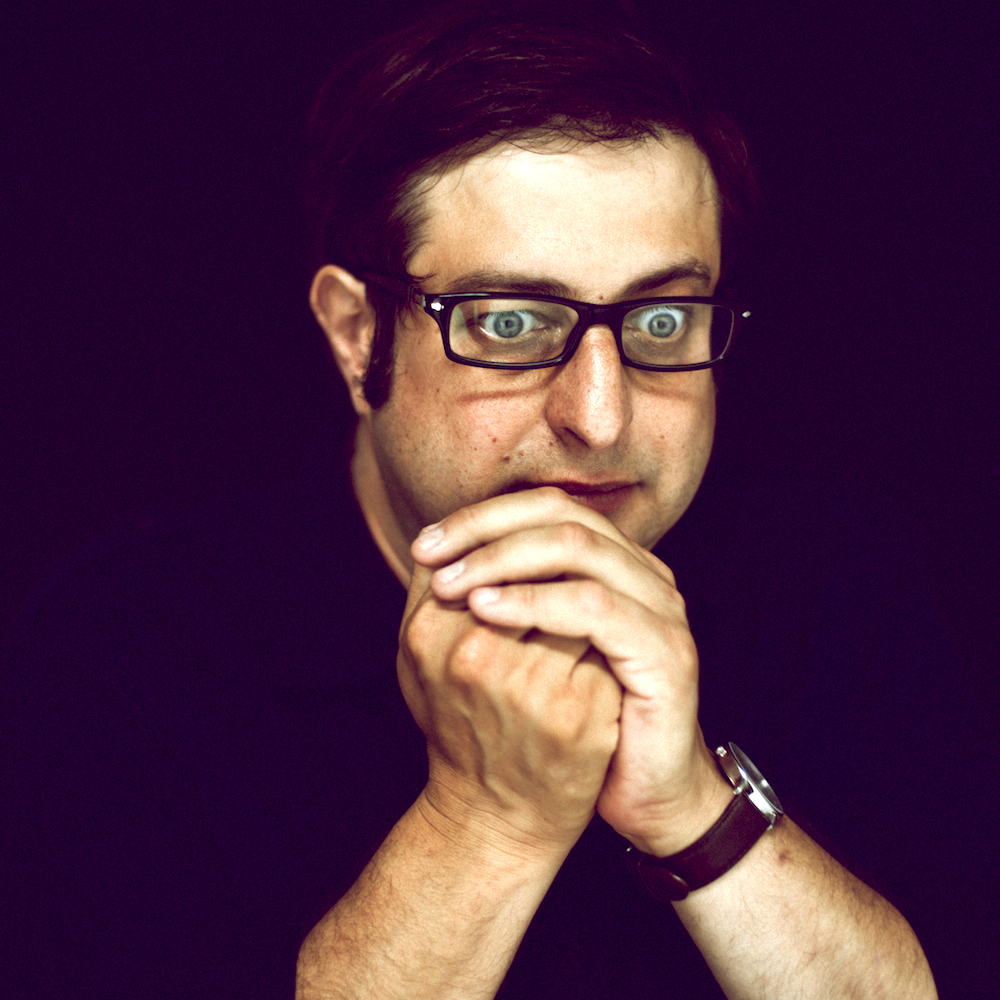 Comedian extraordinaire Eugene Mirman is known and loved for voicing the delightfully quirky Gene Belcher on Fox’s “Bob's Burgers”, which is currently in its 8th season! The show has been nominated for a prime time Emmy 4 times for Outstanding Animated Program, taking the trophy home last year! It's been a critical and fan favorite since it debuted in 2011, and Mirman has his co-stars Kristen Schaal and Dan Mintz told us how the life of a voice actor differs from that of traditional live-action actors while at Comic-Con:

Mirman also just released his latest comedy album that is a just a tad bit... unorthodox. Titled I’m Sorry, You’re Welcome, the 9-volume, 7-LP collection features a live recording of one of Mirman’s shows in Seattle, as well as a rather eclectic mix of sounds and muses, including instructions on how to meditate, an album in which Mirman teaches you Russian, an array of sound effects, and over 45 minutes of Mirman simply crying. In order to celebrate the album’s release, Mirman is currently embarked on a national tour that runs through November 19.

I must confess, I am so used to hearing Mirman voice Gene, whose voice is rather bouncy, that I was a bit taken aback by how deep and soothing Mirman’s natural voice is. During our chat, Mirman attempted to teach me a bit of Russian, explained why he made this album, and what adventures Gene will embark upon next on “Bob’s Burgers”!

YH: How was your tour been going?

EM: It’s been really fun. I did a show in New York that was the album release show, and now I’m in Austin. I did Fun Fun Fun Fest and StarTalk with Billy Nye, which was really fun. I’m heading to LA. We did a live version of one of the things on the album in New York that was really, really fun. I’ve never done stuff that involved music. That was great. StarTalk is always fun. Fun Fun Fun Fest is always really great. Sometimes with comedy and music festivals, it can be really loud if there’s a band nearby, but in this case, there wasn’t, so it was really great. It was a really warm, fun event.

YH: Where did you get the idea for your rather eclectic album, I’m Sorry: You’re Welcome?

YH: What was your favorite noise/sound to record on the album and which one was the most challenging?

EM: I don’t know; we recorded so many. One of the things that I liked was the sound effects. It wasn’t hard to record to sound. It was mostly fun to think of silly things.

YH: In the show “Delocated”, you played Yvgeny, a character from Russia, and on the album, there is a disc in which you teach a few Russian phrases. Do you actually speak Russian fluently, and if so, could you teach me a few phrases?

EM: I do speak Russian, with the caveat that I was born in Russia, but I came here when I was four. I do speak Russian fluently, but I never had any formal Russian schooling. My grammar is sort of off. My conjugation may not be perfect, but essentially, I do speak Russian for all intents and purposes. I can teach you a little Russian! There is a whole album of it. What would you like to learn how to say?

EM: [laughs] Well, that’s the great thing about the album, you can just resay it over and over until you get it. I don’t find Russian too hard, since the Russian I learned, I grew up around. I just sort of know it. It’s as natural as speaking it at home. It’s not like I was one of the only people born with an inherent language. I’m a miracle! Yvgeny’s accent in “Delocated” is modeled after the Russian people I know. I don’t do a ton of characters, but in that show, I based the accent off of them.

YH: What can we expect will happen to Gene on “Bob’s Burgers” this season?

EM: It’s funny, because we record episodes almost a year out. There’s a bunch that are really fun that are coming up. I don’t know when they air exactly this year. There’s one we recorded called “Stand by Gene” where all the kids go on an adventure to search for a two-butted goat. That was a really fun episode. There’s something we just recorded that was a really neat episode. We record so far out that I can’t remember quite remember the adventures that Gene goes on. But there’s a lot of good ones and a lot of rock and roll. I’ll be at Largo this week doing the show with Derek Brown and Josie Long, who are both incredible. My friends Matt and Christian, who I recorded the album with, are coming on the tour. We are going to do some of the musical stuff live, and that’s going to be really fun. I hope that people listen to different parts of the album and explore and enjoy it.

You can catch an all-new episode of "Bob's Burgers" on Sunday night at 7:30pm on Fox. If you're in Boston, you can purchase tickets to the final show in Eugene's tour here. Pick up a copy of Eugene’s new album digitally and physically, and keep up with Eugene on Twitter!