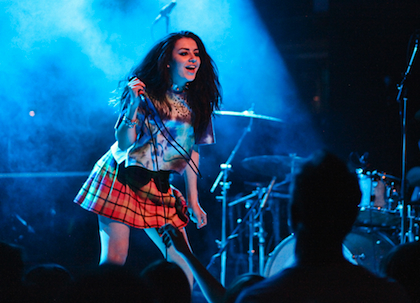 We all have a little rebel inside of us. While some are better at hiding it, some of us just want to break the rules and have some fun... especially Charli XCX.

The edgy pop star released her second single from her sophomore album this week, and its title, "Break the Rules", is pretty self-explanatory. The track is a change from her first single, "Boom Clap", which is much more poppy and radio-friendly.

"Break the Rules" is all about being a rebel -- "The song is inspired by a lot of the things I was listening to whilst in Sweden at the end of last year”, Charli stated. “I spent about a month making a punk record and covering songs by Swedish punk bands like Snuffed By The Yakuza and stuff. This song was written when I came out of the other side of that punk phase and translated it into something more pop. Obviously, it’s about not giving a f**k.”

As she said, this single is a lot more punk and edgy, so it'll be cool to see which direction this second album will go. Sucker is expected to hit stores on October 21st, but Charli XCX is no "sucker" herself. In the track, she shares her rebellious attitude about not wanting to go to school... Perfect timing?

Listen to the track below and let us know what you think in the comments!

And be sure to check out our interview with the singer from this year's SXSW: