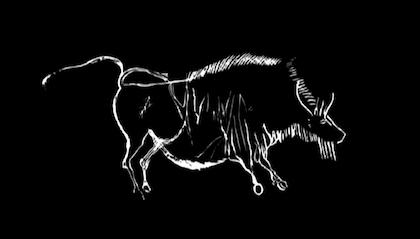 Between theLumière brothers, Georges Méliès,Louis Le Prince, and Cannes, France is certainly shaping up to be Le Ground Zero for filmmaking innovation. It turns out that, tens of thousands of years before Le Prince turned on the first movie camera and Méliès perfected filmmaking as an art, animal skin-wearing, club-toting cave dwellers were already enjoying what we know today as the moving picture. That’s right – before humans even had languages, we had movies. Seems kind of appropriate actually, no?

In this month’s issue of Antiquity, a study details how cavemen figured out how to make their cave drawings move. Using superimposed pictures, these Paleolithic Walt Disneys would bring the images to life with a lighting effect – basically waving torches in front of the drawings to create the illusion of movement. Or, at least, that’s what the researchers were able to conclude after a two-decades-long investigation and observation of at least 53 of these types of images in 12 caves around France. In fact, states the study, the techniques employed by these Stone Age Spielbergs are resonate of the thaumatrope, which wasn’t officially invented until the 19th century(!). This, of course, led to the eventual invention of the movie camera and, 100+ years later,Ridley Scott’s Prometheus… See, everything comes full circle!

Check out the video below for some examples of ancient caveman animation. Cool, huh?