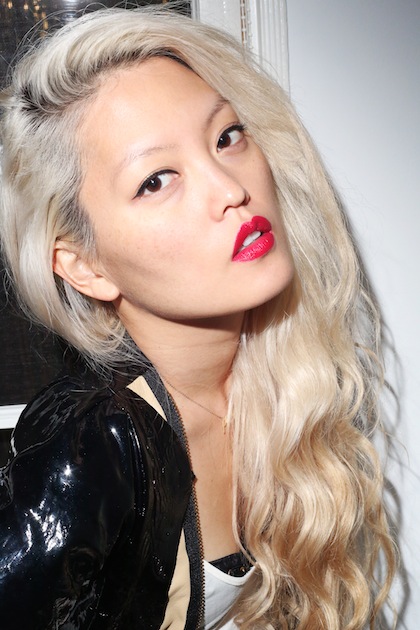 The lovely and talented Hana Mae Lee stars in Pitch Perfect 2, reprising her role as Lilly, one of the most eccentric members of the Barden Bellas. Lee was quickly noticed for her take on Lilly, who, in Pitch Perfect, makes a vomit angel, beat boxes, and whispers, “I set fires to feel joy.”

Hana greeted me as an old friend and filled me in on what to expect in Pitch Perfect 2 and what the Green Bay Packers are like!

YH: Can you tell us a bit about Pitch Perfect 2? What can we expect from the sequel?

HML: We left the first one off as collegiate champions. In the second one, the whole Fat Amy [Rebel Wilson] thing happens, so we are dethroned as a punishment. So we are trying to get reinstated by competing to win the world championships, which an American team has never won. And in order to get reinstated, we have to beat out every team, especially the German team, Das Sound Machine, which is this insanely fierce group, the toughest competition. In real life, they were insane -- they were amazing! They were amazing dancers, great singers, great bodies... they had these amazing outfits with mesh and black leather. The Bella legacy relies on winning the Worlds; that’s a lot of the premise. We had to think, what strings do we pull to make this happen? There is going to be more dancing, more musical numbers, and amazing music. The first one had amazing music as well, and this one has even more nostalgic songs from the '90s, great songs, lots of mash-ups, artists, and amazing cameos. Also, we get to see the girls transition from College Barden Bellas to being Bellas for life.

YH: What are some of the shenanigans that Lily gets up to in Pitch Perfect 2?

HML: In the first one, she makes vomit angels and does her own crazy stuff. In this one, she’s a better dancer, and maybe she saves a life (I’m just saying maybe). I would love if they would do a spin-off with her. There’s so much going on in her world and in her mind. She’s very involved in the group, and she loves being one of the Bellas, but she does live this crazy life. You could go anywhere with that! Her fashion sense is also just killing it this time around. She’s got patterns on top of patterns and lots of cat patterns. It’s a lot of kitties! She wears five different patterns. She’s super fun in this. She’s even more surprising in this one.

HML: The training was even more difficult. In the first one, we were there [in training] for three weeks. We had about four hours of dance and three hours of music. But this time, because we have been champions for three years, the dance numbers were insane -- the mashups were crazy! Originally, we were going to be in training for three weeks and then have a week-long break before we started shooting, but because the dances were so intricate, we actually took all four weeks to rehearse. I think it was even six hours every day for dance. I remember AJ the choreographer saying, “Okay, great, now let’s just pick it up at this point.” I was like, "What do you mean pick it up?! We never stopped!" Our bodies have not stopped moving and the beats are insane! The dancing was intense. Each dance had to be better than the previous ones. We have a dance number where our hand claps are involved, and that just blew everyone’s mind. It looks really good. But that number took us the longest to learn. It’s almost like algebra, learning how in sync everyone had to be at once. It was very rigorous. For training, we also had to run laps. I don’t even run, ever, and AJ was making me run! It was like boot camp. I think that, in the first movie, we all thought it was hard, but it was nothing compared to the second one. The first movie, I gained around 14 pounds because I kept eating all the delicious Louisiana food, but with this one, I came up even with all the dancing.

YH: What was your favorite moment from filming Pitch Perfect 2?

HML: There is a riff-off scene where we are playing with the Green Bay Packers, Das Sound Machine, The Treblemakers, and The Tone Hangers. That was really fun because the music we got to use was great. The music was so nostalgic, and it brought me back to growing up listening to all this great music. The Green Bay Packers were hilarious, they were really funny in the movie. The Tone Hangers are back too with some new members, and they are all played by really great comedians,John Hodgman, Jason Jones,Joe Lo Truglio, Reggie Watts, of course Adam DeVine, and they are just so funny. There wasn’t a boring moment, it was all just fun.

What we did learn was that the Green Bay Packers are actually huge fans ofPitch Perfect. They reached out to the producers to be part of the second one, and I didn’t actually believe that they were actual fans of Pitch Perfect. But then it turned out that they knew all the songs and dances by heart! It was insane! They are big fans of the film. It was pretty surreal.

YH: Any updates on your clothing line, Hanamahn?

HML: Right now, I am looking for investors so I don’t have to do all the production myself. It is currently on hiatus until I find the right people for it. I want the line to be special, with that one-of-a-kind feel, but produced for the masses. I need to find the right way to do that. It’s still happening. Hopefully in the next couple of years it’ll pick back up again and it will have a whole new feel to it, while maintaining the original concept of being special and one of a kind.

YH: Do you have any plans after Pitch Perfect 2?

HML: Lots! My writing partner and I are working on an original series and some original content, which should be released sometime this year. If you follow me on Twitter and on Instagram, I plan to release all the news there. Right now, I am working on a film with Azealia Banks, directed by RZA, that will be released in 2016. Also, at the end of this year I have a movie coming out which is top secret, but will be worth the reveal, I promise! And I’m also very very excited to be a part of the number one movie in America! Pitch Perfect 2, holla!

Pitch Perfect 2 is now in theatres.