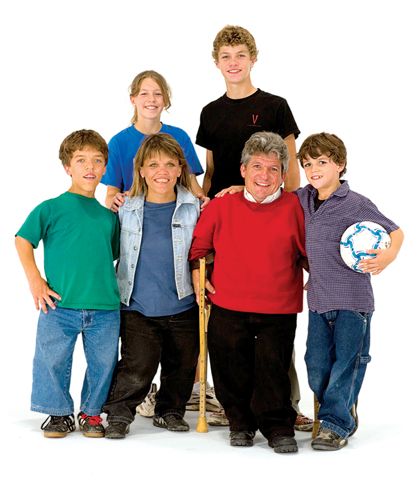 Over the past six years, the Roloff family has graced the televisions in homes across the globe with their hit series "Little People, Big World" on TLC.  This unique family of six -- Matt, Amy, Zach, Jeremy, Molly, and Jacob -- have brought the joy, tears, and education to all of us intrigued by their unrivaled lifestyle; dwarf parents raising twin sons, one of which is also a dwarf and 2 other kids of normal stature while running a pumpkin farm and being activists for little people.

Many accomplishments have followed the Roloffs on their journey so far, and although the show brought more success and lasted longer than they expected, with the show's end nearing, the actions taken and their ability to shatter the misconceptions of little people is proof that there is no world too big for the Roloffs.

We were fortunate enough to be able to catch up with the patriarch of the family, dreamer and activist Matt Roloff, as he delves into the original intentions of the show as well as life during and after the cameras...

YH: So, what are you up to at the moment?

MR: (laughing) We are sort of enjoying the spoils of our success I guess, and taking some well-deserved time off to sort of relax. But at the same time, I don’t let any grass grow under my feet; I’ve got my wheels churning and I think I’ve identified about 14 different focus areas that I am focusing on going forward that is very exciting.

YH: For so long now, you have had the cameras as a part of your everyday life, and now they are going to be disappearing; how are you handling that? Is your main focus just to stay busy?

MR: I would say that’s accurate. In a lot of ways, I think the word most relevant to me would be "relief." I have always been somebody that likes a lot of change; I don’t typically do anything for very long. Doing the television thing for six years, people don’t realize and understand that it’s pretty much a full time job... There is a sense of newfound freedom to explore some of the projects that don’t necessarily make great TV... I’m feeling very energized!

YH: When you first signed onto the idea, your intentions were to bring awareness to those in the world who aren’t open to the struggles of little people. Do you feel accomplished in that area?

MR: Yes. Our initial purpose and mission was to educate people. Our justification for doing the show certainly was not financial in any way. We weren’t seeking fame or anything like that. It was really to educate people about dwarfism. At the time, I was the President of the Little People of America. I had a program in the organization to try to educate kids in school. It was during that time when we were educating 200, 300 kids about dwarfism when we were approached by a production company who said, “Hey, why don’t we get your message out to millions at a time?”

YH: Were there any moments that you wish weren’t caught on camera?

YH: Is there one is particular that stands out?

MR: I can’t think of any off the top of my head, but there were a lot of things that you think that’s an okay moment to be on camera, but I need it to be put in the right context. One of the things we learned very quickly was that things can be taken out of context very, very easily.

YH: What does it mean to you to have this video catalog of your children during this growth period for them? Because six years is a long time, and they did a lot of growing up.

MR: Oh yeah, I love to say that we have the ultimate home video collection! That’s a very precious advantage to doing the show; you have a professionally edited home video. I was a very, very avid home video taker before the show started... It was kind of nice not having to pull my own video camera out.

YH: Throughout the course of the show, you guys got to do a lot of traveling -- like you going to Iraq. Are there any other highlights that stand out that you probably wouldn’t have had the opportunity to do otherwise?

MR: There are so many examples of things that we probably wouldn’t have gotten to do, that we did, and some were wonderful and rewarding experiences like the trip to Iraq. The show didn’t really drive the Iraq thing; that was something that came from a friend. It was all funded out of mine and Amy’s accounts. We had to make contact with the military. But would that opportunity have been as affective would we have been as successful getting the attention of the military and of the state department? Probably not, and so definitely the show played a role in being able to succeed in those opportunities.

YH: Why is the show coming to an end this season?

MR: The contracts are normally done in, like, five year chunks, and we did the first five years, and at the end of that, we really felt like we were done. Basically our contract kind of expired. TLC went through a changing of guards over time during our first five years, and I think they suddenly woke up one day and said, “Oh my goodness, we’re done with 'Little People, Big World',” and they came to us and asked us to extend, but we just didn’t feel like extending for five years. The family was ready for some change and to move on, so we compromised on a shorter contract.

YH: How do the kids feel about the wrapping up of the whole thing?

MR: I think it’s funny because during that whole time, the kids were like (whining voice), "I don’t want to do this" or "I don’t want to do that," but towards the end, as they got older and more mature, they realized it was sort of their lot in life; this is what we were put on Earth to do. As time went on, they became more and more integrated into the process, and they would start coming up with ideas for story ines and episodes that they were interested in. Towards the end, I think they were like, "Oh, we should have been having this much fun at the beginning when we were doing the griping and complaining." I think that there is a sense of relief with everybody; everybody is ready for change. We always talked about one day this would come to an end; this was just a temporary thing in our life.

YH: How can we stay in touch with what the Roloffs are doing when the show wraps up?

MR: You can’t, we’re going into hiding. (laughs) The best way right now... I  have a very, very active Facebook, and there’s MattRoloff.com. One of the things we looking at is, we have been approached to do kind of a “Rolling on with the Roloffs,” so maybe we would do an annual, bi-annual, or a quarterly special that would give audiences a sense of what’s going on and what are the big changes that are happening in our lives. Amy wants to do a cookbook and is very active in her charity and wants to continue that. I have a charity... we are going to do what we always do, which is to tackle the next adventure in life with the same figure and resiliency and trust in God that we’ve always had.