Catching Up with Jesse McCartney 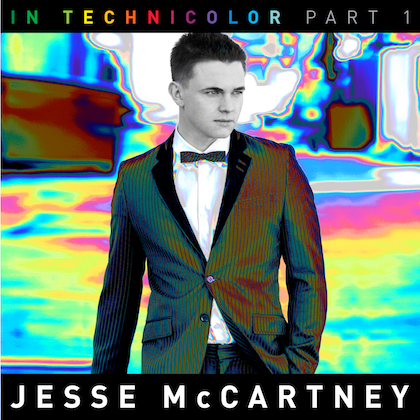 Jesse McCartney is all grown up and he has a new sound to prove it.

After a 3-year hiatus from the music scene, McCartney has just dropped his new EP, In Technicolor Part 1. This marks a new era for the singer-songwriter, who has recently departed from his longtime label, Hollywood Records. The 4r-track EP reveals a mature, retro-inspired sound with soul-baring lyrics to match. I chatted with the 26-year-old about his upcoming album, growing up in the industry, and of course, finding that special someone.

YH: Where did you get the name for the title track, In Technicolor Part 1?

JM: At one point during the making of this album, I came up with this theory that your 20s are rough because you’re constantly thinking about your personal life and your professional life… and everything’s in black and white. Nothing means anything until you find that person you’re going to share your life with, and once you find them, that’s the color that colors your world. That’s been my experience in terms of my relationship with women. Everything I do, I feel like I need to share it with someone.

YH: How are your fans reacting to your new sound? It’s definitely more mature than anything we’ve heard from you before.

JM: They’re super excited! I’m always happy when it seems like they connect with the lyrics or songs. I love when they tell me they have been through the same kind of experiences. My fans grown up with me over the years, and now some of them are getting married and will be like, “This is going to be my wedding song!” It’s crazy. The comments have been overwhelmingly positive. I couldn’t be happier.

YH: Are there any artists out there that you would love to collaborate with?

JM: I’ve always had a dream of collaborating with Prince. He is the greatest musician on planet earth. Unfortunately for us, we’ll probably never have another Prince in our lifetime, so to work with him would be a dream come true.

YH: If you could tell your 16-year-old self one thing about love, what would it be?

JM: I would tell the 16-year-old Jesse to be patient. Don’t force anything that doesn’t feel right because it’ll all be okay and it’ll all work out. [laughs] But I don't know, you could tell the 16-year-old Jesse anything about love. He was kind of a brat… with a wink, of course. I had a good family to kick me in the butt every once in a while if I was being a little bit of a punk.

YH: Let’s talk about the track "Tie The Knot". Are you feeling the pressure to settle down and get married?

JM: It’s definitely something I’m thinking about. Everybody thinks about marriage to some extent, and guys are lying if they say they don’t! It doesn't mean they’re ready to pull the trigger 100%, but they may be wondering what life is going to look like in the next 10 years. Marriage isn’t for some people at all, but I feel like most people are wondering who they’re going to share their life with.

YH: These songs really showcase your skills as a songwriter. Are you ever hesitant about getting too personal with your music?

JM: I think every album marks a moment in time. I don't know how I’m going to feel in 5 years, but these songs are a reflection of how I’m feeling at this point. Honest songwriting is the best songwriting, and when I think of the best artists, it’s always singer-songwriters. They are the ones who aren’t afraid to reveal their personal qualms, excitement, or fear. That is what people connect with the most and it’s what makes music so gratifying — it’s the ability to feel someone else’s emotion because maybe you’ve felt it too.

YH: How has the entertainment industry changed since you first started out in Dream Street?

JM: The business has changed drastically. This is my first album that I’ll be putting out completely independent of a major label. I’ve been doing this for 10 years with a major record company [Hollywood Records], whom I love, but I think it got to a point where I realized that I could probably do this on my own.

YH: How did you know that you were ready to do this album on your own?

JM: I was feeling a sense of mastery when it came to music, especially on the creative side. With the help of social media at our fingertips, it’s becoming a lot easier for artists like myself to do it on our own. That’s kind of where the curve is headed, and I’m happy to be ahead of the curve.

YH: Can we expect a tour?

JM: Absolutely! I haven’t booked anything yet, but I'm hoping to get out on tour by spring 2014. That’s one of my favorite parts of this job, getting to perform for people.