Cast of "Community" Goes Viral with Save Greendale PSA 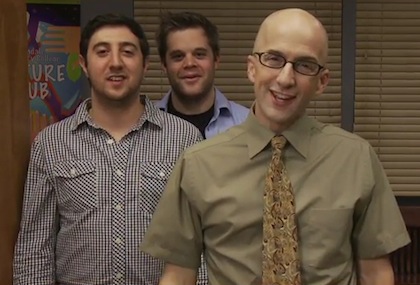 It was only a matter of time, and ever since it was announced that “Community” would be put on indefinite hiatus, fans everywhere have been rallying to save the popular, Emmy Award-winning NBC show. Now, the viral videos have begun. And what better, more appropriate place for the actual cast of the show to make their own tongue-and-cheek appeal than on CollegeHumor.com?
Set up as a low-budget PSA to keep the school open, the characters from the show appear as brief talking-heads, highlighting the many(?) advantages and benefits of a Greendale Community College education(?) and why it shouldn’t be shut down. Yes, we see what you did there, guys. Cute.
In all seriousness though, if nothing else, this video reminds us why it would be such a loss if this show got the boot. The quirky characters, the hilariously clever writing, Chevy Chase... There’s a hole in my primetime heart that can only be filled by “Community”. Sigh...
Check out the video below, and join the cause to Save Greendale CC!!!
(Image via CollegeHumor)
- Katie Marzullo, YH Staff Editor
[email protected]