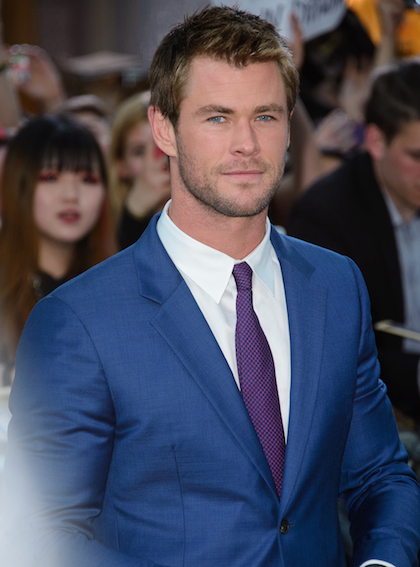 Paul Feig’s Ghostbusters reboot keeps getting bigger and bigger... and bigger. In addition to Melissa McCarthy, Kate MicKinnon, Kristen Wiig, and Leslie Jones headlining as the Ghostbusters themselves, the movie is getting plenty of new cast members in mostly tightly-wrapped roles, with the exception of Chris Hemsworth, who will play their (hunky) receptionist. I’m pretty excited to see that, since it’s hilarious to think there’s a desk chair large enough for him to sit in and a phone big enough for him to pick up.

Other big names reportedly joining the cast include Oscar nominee Andy Garcia, "Boardwalk Empire" star Michael Kenneth Williams, SNL cast member Cecily Strong, and one of the four UCB founders Matt Walsh. None of the details surrounding their roles have been released to the public, but if they really want to own the gender-swapping premise this reboot is being publicized for, then having Strong play the Walter Peck character would be perfect. If you don’t remember Walter Peck from the original Ghostbusters, he’s the jerk that kept trying to stop the Ghostbusters because of things like their proton packs being "untested" and "unstable" and "dangerous". And for as much of wet blanket as Peck was in the first movie, he’s actually completely right in all of his concerns. (Go back and watch. It’s actually true.) It’d be funny to have Strong as a woman play this role and counter the other four’s every move with different roadblocks and constant complaining.

Rounding out the new casting is a former SNL writer, co-star of Feig’s Yahoo Screen! comedy “Other Space”, and UCB improviser Neil Casey. Casey will play the "true villain" of the movie. Does this mean he’s Gozer, or something completely different? We don’t know yet but for those unfamiliar with Casey, think of him as sort of comedic version of Phillip Seymour Hoffman… Yes, that does exist!

Ghostbusters premieres Jully 22 of next year, so you have over a year to wait. For now, just let all of these new updates sink in for a while and speculate as much as you want… because you have over a year. In the meantime, we have the other two movies to watch and a [email protected]$$ theme song to enjoy: