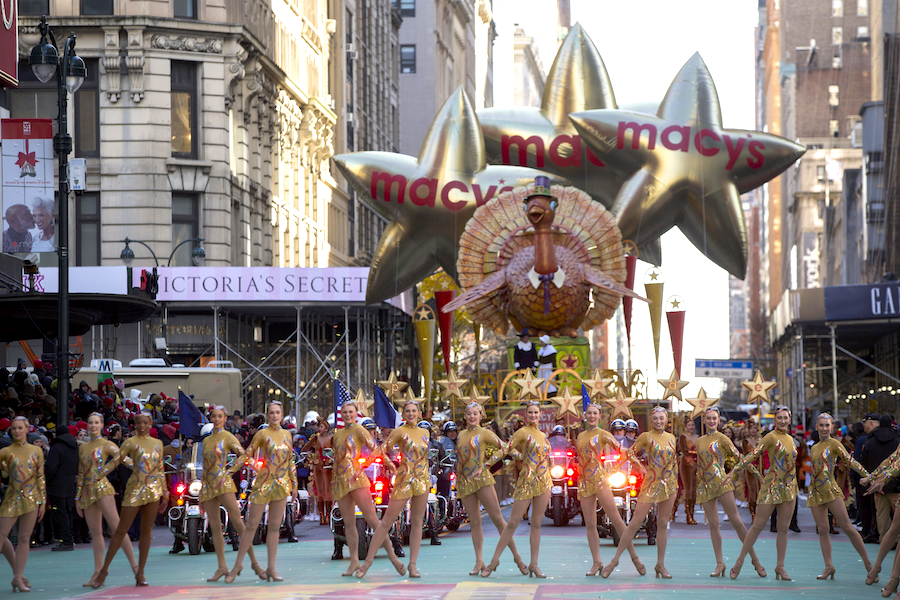 Thanksgiving is going to look a little different this year due to social distancing guidelines and safety protocols, but that doesn’t mean you can’t celebrate. While Macy’s won’t be hosting their annual Thanksgiving Day Parade in a traditional sense, why not create your own using elements from the past? From larger than life balloons to special musical performances, we have curated some of our favorite moments to bring the parade to your screen this year!

There’s nothing that screams Thanksgiving more than the Pillsbury Doughboy. Whether you’re craving buttered biscuits or delicious pie crust, this iconic Pillsbury mascot will definitely make an appearance in your kitchen this week and on your screen.

In 2018, the cast of The Prom took over the famous green main stage at Macy’s Thanksgiving Day Parade. This high-energy number about love and acceptance had the crowd on their feet and definitely brought back nostalgia from high school prom for many!

Known for their high kicks, the Radio City Rockettes took over the stage in 2019 to perform their famous “Sleigh Ride” number for audiences worldwide. Dressed up in their chic reindeer outfits, this in-sync dance company definitely knows how to bring the holiday cheer.

Al Roker has been host of Macy’s Thanksgiving Day Parade for many years, but last year he had a battle with the I Can’t Believe It’s Not Butter "Butter Man". The man kept appearing in Roker’s shots, but just wanted to make people smile who have been waiting on the sidewalks for a glimpse of this famous parade since 5am.

In 2017, the Rockford High School Marching Band from Rockford, Michigan, took over the stage at the parade to perform Andy Williams’s “It’s The Most Wonderful Time Of The Year”. From trombones and drums to colorful dancers, this high school marching band definitely left an impression.

Former Vine stars and music duo Jack and Jack performed their song “Rise” at the parade in 2018. Jack and Jack had the crowd on their feet and clapping to the beat of this pop song.

No Thanksgiving Parade is complete without the grand finale:Santa Claus himself ringing in the Christmas season! Yes, we know many of you already have your Christmas decorations up as I type this, but it's not officiallyChristmastime until Santa makes an appearance at the end of the Parade!