Breaking Down the Epic New 'The Last Jedi' Trailer: The Hype Is Real!

Back in April, when the first teaser trailer for Star Wars: The Last Jedi dropped, not much in the way of plot was revealed, but certain things were definitely, heavily hinted at... things that I already suspected given the groundwork that was lain in The Force Awakens. Now, the full trailer has been released, and it seems that all my suspicions have been confirmed. Validation is sweet!

Let's jump right into it, shall we?

We open on Kylo Ren (Adam Driver) gazing out a window, followed by shots of AT-ATs, Kylo leading a regiment of Stormtroopers, a closeup in his helmet (which we presumed lost after TFA), and picking up his lightsaber off the ground, all while we hear Supreme Leader Snoke's (Andy Serkis) creepy voice saying (to Kylo, presumably): "When I found you, I saw raw, untamed power. and beyond that, something truly special..." ICK. He sounds like a textbook predator, grooming his young victim...

Interestingly, though, from here, piggybacking on Snoke's words, we jump right into a shot of Rey (Daisy Ridley) activating Luke's lightsaber.

We black out momentarily before seeing the Lucasfilm logo and then get swept away to Acho-To, where we last left Rey, handing the lightsaber back to its rightful(?) owner, Luke Skywalker (Mark Hamill).

As we follow Rey's journeys around Acho-To (including finding those conveniently lit scrolls/books from the teaser trailer) as well as her lightsaber training, we hear her voice: "Something inside me has always been there... then I was awake, and I need help."

Sounds like she has resigned herself to her fate and is ready to accept her destiny and training... but is it from Luke? This juxtaposition would suggest so, wouldn't it? Well, not so fast...

We then see a crack form on the cliffs where Rey is communing with the Force or something, and Luke looks visibly concerned.

"I've seen this raw strength only once before," Luke says, as we see some flashback shots of his Jedi Academy burning (at the hands of Kylo Ren, as we know from TFA). "It didn't scare me enough then, but it does now."

Again, drawing parallels between Rey and Kylo, and their powers in particular. Luke seems to be rejecting Rey out of fear that she'll be another Kylo, which leaves her looking bereft.

Yes, while Rey struggles to find acceptance from Luke, Kylo Ren appears to be having his own identity crisis, as he picks up his helmet and then smashes it against the wall, while we hear his soothing, not-at-all-menacing voice say "Let the past die."

We then jump to a battle sequence, where the juxtaposition of shots suggests that Kylo (in his snazzy TIE fighter) is preparing to destroy a ship carrying his mother, Leia (Carrie Fisher), and he is none too keen on the idea, obviously. Meanwhile, his voiceover continues: "Kill it, if you have to. That's the only way to become what you're meant to be."

So, is this voiceover referring to himself? Is he coldly declaring that he needs to literally "kill" his past (AKA his family) in order to become Darth Vader 2.0? This assembly of clips, coupled with the manner in which he murdered his father Han Solo in TFA, would suggest that this is the case. But again, I think this is a misdirection. Keep reading...

We take a brief respite from the main storyline to bring you... 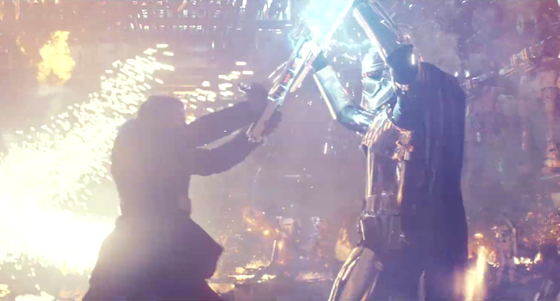 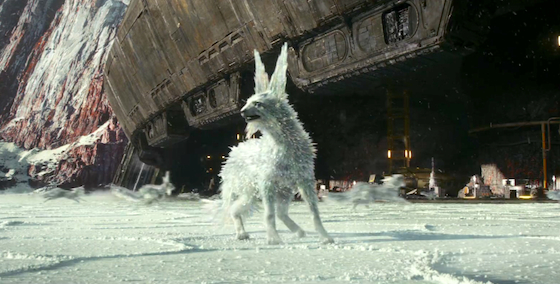 Over all this, we hear Poe Dameron (Oscar Isaac) dreamily declare, "We are the spark that'll light the fire that'll burn the First Order down."

Then we move swiftly back to Story A, with Luke saying, "This is not going to go the way you think!" Oooooh how meta!

We also see a couple of shots of Leia looking forlornly outside of a ship's entrance, as if waiting for something that will never come... 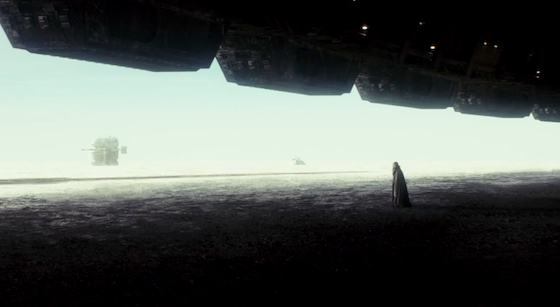 Back on Acho-To, Rey takes a dip and finds Luke when she remerges:

And then we hear AND see Supreme Creeper Snoke say "Fulfill your destiny" while he is clearly torturing Rey!!! (Kylo ain't gonna take too kindly to that, methinks...)

And then... THE MONEY SHOT. Circling back to Rey's earlier voice-over about being awake and needing help, we see her continue: "I need someone to show me my place in all this."

We cut to the person she's really been talking to this whole time:

Now we can also deduce that Kylo's speech about killing one's past was most likely directed at Rey, once again offering her his guidance in the ways of the Force as he had at the end of TFA. This time, it appears she is accepting it.

YES THAT'S RIGHT, everything I predicted two years ago seems to be coming to fruition! REDEMPTION ARC AHOY, #REYLOISREAL! As was merely hinted at by the teaser trailer and the teaser poster, the story seems to be headed in the direction that I always imagined it -- Kylo and Rey eventually teaming up to find that all-elusive Balance in the Force. No, I do not think Rey is going to go Dark, because Kylo isn't all Dark either. This is Gray Jedi territory all the way, folks, and I am SO HERE FOR IT.