Breaking Down the 2015 Oscar Nominations! 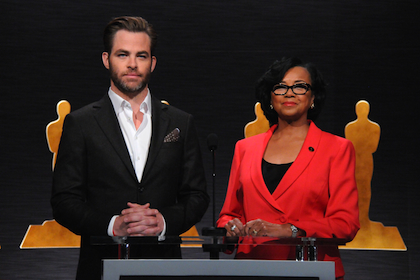 That extra golden glow in the air hanging over L.A. this morning could only be the result of one thing – Oscar Nominations!

Hollywood’s Biggest Morning was kicked off bright and early with the announcement of all the talented men and women who will be competing for the ultimate prize in the film biz this year.

First and foremost, Best Picture – 6 out of the 8 nominees were pretty much guaranteed. You’ve got your Birdman (up for 9 nominations in all), Boyhood (Golden Globe winner for Drama), The Imitation Game, Selma, The Theory of Everything, and Grand Budapest Hotel (Golden Globe winner for Comedy, and also boasting 9 noms in all). Eking their way into the game is Clint Eastwood’s wartime drama American Sniper, and the dark horse pick Whiplash seems to be occupying a space that many assumed would be taken up by, say, Foxcatcher. It’s a very interesting variety of offerings. Four of the films are biopics, and we all know how much Oscar luuuuvs biopics, but I think the race will be between Boyhood and Birdman, both extremely creative and innovative in their own ways. It all boils down to your preference for long takes or long shoots...

Foxcatcher’s exclusion from the Best Picture race becomes even more interesting when you notice that the film’s director, Bennett Miller, was nominated. Say whaaat?? Not that he isn’t deserving, but perhaps this slot could have gone to someone like, say, Ava DuVernay for Selma? Her joint DID get a Best Picture nod, AND she was nominated for a Golden Globe (whereas Miller was not). Am I missing something?

Also repping for Foxcatcher are stars Steve Carell for Best Actor and Mark Ruffalo for Best Supporting Actor (Channing Tatum had been getting plenty of buzz himself, but no dice this year). I’ve not seen the film yet, but from what I understand, these categories should have been reversed, as Carell’s character was more of a supporting role and more focus was on Ruffalo’s character. Either way, it’s quite an achievement for Carell – he’s certainly come a long way from “The Daily Show” and Evan Almighty, eh?

Joining Carell in the Best Actor suite is America’s Sweetheart Benedict Cumberbatch, who is enjoying his first (and likely not last) Oscar nomination; Michael Keaton continues his big comeback tour with a nod for Birdman; Eddie Redmayne gets his completely unsurprising nomination for The Theory of Everything; and the Academy makes up for Bradley Cooper’s Golden Globes snub by recognizing him here. This is the 3rd year in a row that Cooper has been nominated, so he’s well on his way to being the male Meryl Streep. However, I think he might have to wait at least another year to claim the prize, because Keaton seems the clear favorite.

As for Supporting Actor, Ruffalo will be going toe-to-toe with his fellow Incredible Hulk Edward Norton (Birdman), while the rest of the docket basically mirrors what we saw at the Globes – Ethan Hawke (Boyhood), Robert Duvall (The Judge), and J.K. Simmons (Whiplash). Can the latter duplicate his Globes success and parlay it into a shiny gold Oscar? Well, he does seem to be the favorite, but the Academy may very well play it safe and hand it off to Hawke or Ruffalo. (If Duvall hadn’t already won an Oscar before, I’d put him close to the front too, cuz Oscar loves handing out hardware to aging legends that have never won when they’re on in their twilight years.)

As for the ladies, former Oscar winner Marion Cotillard squeaked in for a Best Actress nod for a film I’ve never heard of and isn’t even in English (Two Days, One Night), joining fellow former winner Reese Witherspoon (Wild), 4-time nominee Julianne Moore, and newcomers Rosamund Pike (Gone Girl) and Felicity Jones (The Theory of Everything). As fun as it would be to see one of the last 2 pull an upset, I think this is the year Julianne Moore finally breaks her winless streak.

As for Supporting Actress, Meryl Streep gets her obligatory nomination for the year (for Into the Woods), bringing her total up to 19. Meanwhile, actual contenders include Globes winner Patricia Arquette (Boyhood), Keira Knightley (The Imitation Game), Emma Stone (Birdman), and, out of nowhere, Laura Dern (Wild). Surprising to see Amy Adams left off the list, but she’s been nominated 5 times in the last 9 years, so we can give her a break this year. Her day will come, believe me. Who will reign supreme in this category this year is anyone’s guess, though; Again, it would be really cool to see someone like Arquette walk away with it (on her first-ever Oscar nomination), but the Academy voters might go for something more “conventional” with Stone or Knightley… Not that those two aren’t deserving, but I think their best has still yet to come.

And I could go on! But check out the full list of nominees for yourself and let us know your thoughts in the comments below!