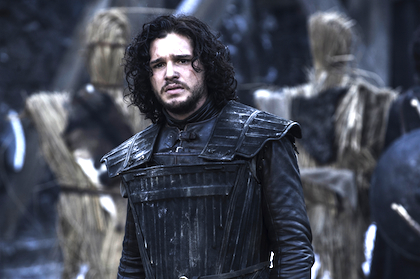 Send a raven to every corner of the realm – “Game of Thrones” is coming to IMAX theatres!

Yes, ‘tis true, wildlings… Starting January 29, for one week only, HBO is screening the final 2 episodes of Season 4 PLUS premiering the first teaser trailer for Season 5 in theatres all across the country!

For avid fans of the show, you will know that the last 2 episodes from last season (“The Watchers on the Wall” and “The Children”) will no doubt make excellent viewing on the big screen! For those who don’t know… just take my word for it. The episodes will be digitally remastered for an optimal IMAX experience, and we assume the same for the teaser. Hopefully the trailer will contain NEW material from Season 5, unlike the vague little clips people have been getting on their “GoT” apps that  contain mostly just shots from previous seasons (sorry to rain on y’all’s parade, but it’s true).

It seems hard to believe that this is the first time that the HBO series, based on George R.R. Martin's amazing books, has graced a movie screen for the general public. Each episode is practically a mini-fantasy film on its own, so it almost seems like a waste to limit it to a television screen (as fancy as they may be nowadays). Of course, if the rumors are true, this might not be the last time we see our favorite Westerosi characters on the big screen…

34 states will be participating in the screenings, with cities including New York, Los Angeles, Phoenix, Orlando, Chicago, Indianapolis, Baltimore, St. Louis, Las Vegas, Philadelphia, Austin, and Seattle, with more expected to be announced (including Canada). Here in L.A., screenings will take place at the AMC theatre in Universal Studios’ CityWalk, so you’ll know where to find me. See the full list of theatres here.