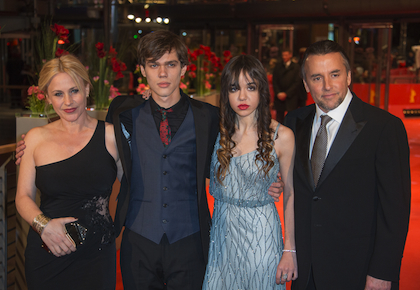 When a movie that’s as innovative and stellar-looking as Boyhood manages to fly past my radar, then I think it’s time I officially turned in my Cinephile License. To be fair, though, it is hard this day and age to get your head above all of the comic book/sci-fi film news that’s out there, like the recently-released cast list for Star Wars: Episode VII... pretty big news that even I myself have only just stopped gushing about it.

OMG! Oscar Isaac, Max von Sydow, and John Boyega are going to be in the new Star Wars movie!!!

Truly, it is a fine time to be a science fiction fan, and there is little to no harm in letting yourself get a tiny bit carried away. But every once in a while, I like to bring things back down to Earth and discuss the little films that sometimes go unnoticed. And that brings us back to Boyhood and the film’s director, Richard Linklater.

For a long time now, Richard Linklater has been one of my favorite filmmakers. Before Midnight was in my Top 5 list of best films of the past year, as it succeeded in bringing some potential closure to one of the greatest cinematic trilogies in the history of film. Aside from the Before movies, Mr. Linklater is also the mastermind behind such beloved films as Slacker, Waking Life, Dazed and Confused, and the remake of Bad News Bears.

So, what exactly is all of the hubbub with this film Boyhood? Well, it seems that, back in 2002, Richard Linklater cast 6-year-old Ellar Coltrane to be the star of what was then called The Untitled 12 Year Project. The temporary name for the film was pretty appropriate, because for the next 12 years, Richard Linklater constructed a film that would detail a small boy’s journey from childhood to adolescence. The fact that any director would spend that amount of time on a project is one thing, but the fact that he got an entire cast of actors to go along with it is quite another. I’m sure there are cynics out there that might dismiss this as merely a gimmick, but I honestly don’t think that that level of stupidity even exists in this world. Mr. Linklater is a man who has spent his entire career trying to infuse a certain type of honesty into a body of work that remains fresh and exciting. My hope for Boyhood is that it will live up to expectations and become a shining example to other filmmakers out there that the sky is the limit in terms of what you can do with this medium and to never allow yourself to sink into the mire of mediocrity that sometimes plagues this industry.

So, while you mark your calendars for new films like The Amazing Spider-Man 2, X-Men: Days of Future Past, and Guardians of the Galaxy, please be sure section off a little bit of time to go see Boyhood in order to support the innovators out there that don’t need special effects to bring their talents to the world.

Oscar Isaac and Max von Sydow are going to be in the new Star Wars movie!!!!!!

Okay, it’s definitely out of my system now.