Bourne vs Batman: BFFs Matt Damon & Ben Affleck Set to Square Off in 2016! 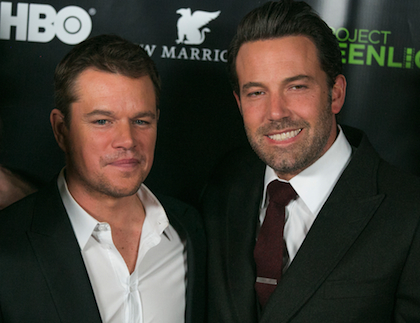 In 1997, two best friends struggling as actors from Boston wrote an Oscar-winning screenplay for a little movie called Good Will Hunting. Now, these two friends are Hollywood juggernauts, with Matt Damon starring in a wide range of films, and Ben Affleck not just starring in films but directing award-winning ones as well. Coming in 2016, with the releases of Batman vs. Superman: Dawn of Justice (March 26, 2016) and Bourne 5 (working title/released sometime in 2016), the two friends will be standing at opposite sides of each other as blockbuster box office rivals.

Who will be victorious in the fight at the box office? Nobody knows right now, but maybe we can figure out who would win in an actual fight. And, no, I don’t mean a fight between Ben Affleck and Matt Damon. (But for the record, Affleck totally would. He can destroy bank vaults with that chin.) We’re talking about a fight between Jason Bourne and Batman.

I know what some people might be saying when they’re reading this: it’s got to be Batman. With the latest craze for Batman in the past five years or so, everybody loves Batman and find the idea of the Caped Crusader getting a beat down courtesy of Jason Bourne hard to swallow. But let’s look at their similarities first -- They’re both human beings (obviously), they both have kickass kung fu moves, they both have unfavorable pasts, and they are both misunderstood by the government (police, FBI, CIA, etc.).

It really is tough to say which way one could go. One thing Jason Bourne has over Batman is that he is highly skilled with firearms, including sniper rifles. If they were to find themselves fighting on a big playing field, then sniper skills would surely help. With Bourne’s firearms efficiency comes the basic fact that, unlike Batman, Bourne has no problem killing somebody. But since he’s always on the run from the CIA, Bourne has to acquire firearms by usually taking out some straggling, cretinous, nameless CIA agent.

Batman, on the other hand, has his weapons always available to him. Most of his weapons are mainly used for stunning criminals, so Jim Gordon and Johnny Law can lock them up. Remember, the CIA is ALWAYS looking for Jason Bourne. Now, whether Batman uses his batarangs or even the Batmobile and the Batplane, so long as he can pin down Jason Bourne and tie him up, somebody will come around and lock Jason Bourne away. The only thing is, if Bourne is tied up and still conscious, there’s a strong chance he can escape. The man is like Harry Houdini, but with more of an emphasis on killing people.

It’s really hard to say who would win. Right now, I’m kind of leaning towards Jason Bourne pulling a fast one on ol' Batman. I don’t think Bourne would be able to kill Batman, but he would be able to escape Batman’s advances on him. Maybe it’ll all come down to sidekicks. We’ve got, depending on who you speak to, either six different Robins or about ten-plus. Girls, not just guys, also fill the sidekick role of Robin, in case you didn’t know. But gender has never been a problem when it comes to the people Jason Bourne kills. If your grandma was plotting something against Bourne, he’d snuff her out in a second. But I digress.

Now, in Jason Bourne’s corner for a sidekick, we have… NOBODY! Jason Bourne doesn’t have a sidekick. He’s pretty much a lone wolf. But in 2007, Ben Affleck said he was hoping that the “last” Bourne movie (The Bourne Ultimatum) would have a sidekick, and that it would be him. So, by default… Of course… We should’ve seen this from the start… How could we not have known this? Are you ready for it? You sure? The winner is…

Ben Affleck! You just can’t beat the strength of that magnificent chin.

Be sure to look out in 2016 for Batman vs. Superman: Dawn of Justice and whatever Bourne 5 will be called! Choose a side! Or go see both… Or neither. I can’t tell you what to do.

Here are Matt Damon and Ben Affleck during better times:

Who am I kidding? Their lives rule.

In the meantime, keep an eye out for Season 4 for Matt & Ben's reality competition series, "Project Greenlight"!