Stars of 'Hocus Pocus' Want to Conjure Up a Sequel! 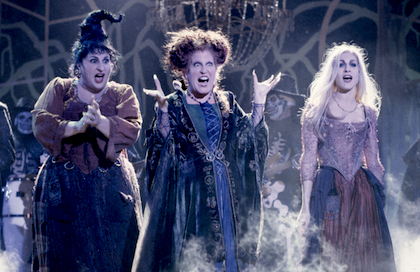 In 1993, a simple family film about three wild witches who wreak havoc on modern-day Salem, Massachussetts, was released to great acclaim. Over 20 years later, Hocus Pocus has become the quintessential Halloween film. Seriously, if ABC Family doesn’t play Hocus Pocus at least a dozen times in October, than Halloween is cancelled.

Years later,Hocus Pocus is still a huge cult hit, thanks to the delightfully kooky Sanderson Sisters played by Bette Midler, Kathy Najimy, and Sarah Jessica Parker (in the finest role of her career, let's be real... Carrie who??). Thanks to the tight bond that still remains by the on-screen sisters, ABC Family may soon have another Halloween movie to add to their October rotation -- rumor has it there will be a Hocus Pocus 2!

The always-divine Midler first revealed the news during a Reddit AMA that she, Najimy, and Parker are all game to star in a sequel. Midler encouraged her middinions to pressure the Disney company into greenlighting the film, and it wasn’t long before Najimy and Parker took to Twitter to encourage their fans to do the same. Midler explained that she wants the sequel due to the sheer amount of love there is for Hocus Pocus, ranging from costumes to statues. Of course, there’s no real way to even tell how aHocus Pocus sequel might work, considering how the original film ended, but, hey, the three main characters ARE witches, so nothing little magic can't cure!

Would you want to see a Hocus Pocus sequel? If so, take Bette, Kathy, and SJP's lead and write to your local Disney representative today!