Ronda Rousey to Play Herself in Own Biopic & 8 Others Who Have Done the Same! 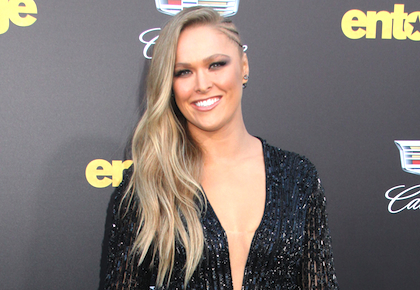 UFC fighter and now author of her autobiography My Fight/Your FightRonda Rousey is no stranger to acting. She has been in three major movies, including The Expendables 3, Furious Seven, and Entourage. Much like her role in Entourage, Rousey will be tackling her toughest role yet -- playing herself, which, if you didn’t get, that’s who she played in Entourage as well.

It is reported that Rousey will play herself in an upcoming film based on her autobiography, which we can assume will share the title of My Fight/Your Fight. Although this is very cool to see, Rousey isn’t the first person to tackle the role of playing themselves in a movie or even on TV. In fact, there have been quite a few successful transitions of people playing themselves, or characters directly based on themselves in similar situations they actually lived. Let’s take a look at a few:

Eminem as B-Rabbit in 8 Mile – This film starred Eminem as a rapper living with his mom, whom he doesn’t get along with, in the 8 Mile neighborhood of Detriot, MI, which is exactly where Eminem himself is from and his exact life background. Certain details in the movie were directly lifted from Eminem’s life, like his tumultuous relationship with his ex-girlfriend, who really does seem to be based on the notorious subject of many of Eminem’s songs, his ex-wife Kim Mathers. Other relationships between characters parallel real-life instances, but the most interesting aspect of the film is probably how well Eminem really does play his former angry, blue collar self, with glimpses of his joking nature. It’s pretty great to see, especially since Eminem was never really known as an actor prior to this. (Fun fact: Eminem also played himself on the original TV version of “Entourage”.)

Amy Schumer as Amy Townsend in Trainwreck – Okay, so Amy Schumer doesn’t actually play a stand-up comedian in this; instead, she is a journalist. Nonetheless, the parallels of what Amy preaches in her stand-up, as well as the version of herself that she portrays on the stage and on her TV show, is highly obvious here. And she did one hell of a job doing it too. John Cena’s cameo is also apparently inspired by a real-life fling Schumer had with a WWE wrestler.

Channing Tatum as Michael “Magic Mike” Lane in Magic Mike and Magic Mike XXL – Okay, I have not seen this film. It’s not my cup of tea. Seriously, I absolutely was not there opening day for both movies, you cannot prove otherwise. According to some people behind Magic Mike, though, the films were inspired by Tatum’s real-life pre-fame career as a male stripper before he hit it big in Hollywood. Much of the plot of the film outside of the stripping, however, is false.

Louis C.K. as Louie in “Louie” and Jerry Seinfeld in “Seinfeld” – A two-for-one as both comedians played themselves as stand-up comics on television shows, literally. C.K. changes the spelling of his first name a bit but people even refer to him as Louie C.K., and he does have two daughters that he handles much better than most divorced dads do. In fact, he is known to halt production of his TV show and schedule stand-up tours around when he can be with his daughters. Seinfeld actually plays a character named Jerry Seinfeld who tells the same exact jokes he does, and is made the subject of jokes on the show for being a terrible actor. Both shows are must-watches.

Larry David as Larry David in “Curb Your Enthusiasm” – Speaking of Seinfeld, David literally plays the role of Larry David, the genius writer and creator of the sitcom “Seinfeld”, and his struggle with laziness, anxiety, and insecurity when he doesn’t work on anything. It’s pretty incredible how he’s made himself, a set-for-life millionaire, into a character who is crippled with so much unnecessary stress from the real world, because he truly lives in his own mind. Luckily, he has enough awareness to use it to his advantage. Don’t believe he really is a neurotic mess in real-life, like he wants you to believe? Check out one of my favorite clips of David outside of “Curb”:

I’m with you, Larry David. Of course, you can afford five dollars, but it’s a matter of principle!

Tina Fey as Liz Lemon and Tracy Morgan as Tracy Jordan on “30 Rock” – Another two-for-one. What links these two together is being on the same show. There are many differences between both of them and their characters, especially when the almost-chronically single Liz Lemon, who also kind of gets around when you look at it, has only had one relationship in her real life, which is to her husband and the father of both of her daughters, “30 Rock” composer Jeff Richmond. Details, like Liz being a head writer of late-night sketch show, her improv background, food addiction, workaholicism (yup, I made up a word), hating of most things, sense of humor, Star Wars obsession… the list could go on forever… are really details about Fey herself. As for the Tracy Jordan character, there are many parallels and sometimes even exact life details lifted from Morgan’s life and used on the show. Plus, the man is really just a character in real life. In fact, his co-star Alec Baldwin can back it up:

So, Ronda Rousey is in good company. Plenty of other people have tackled this before, and it’s easy to guess that most of them have never been in a real physical fight in their lives. Safe to say, I think she’s got this.